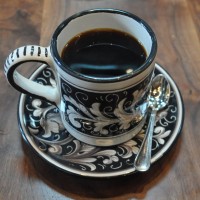 Continuing a theme of slightly larger places doing more than just coffee, the Coffee Spot celebrates its return to America with a standout from my previous trip in March. Regular readers will already be aware of my affection for La Colombe, with visits to branches in Philadelphia’s Dilworth Plaza and NYC’s Lafayette Street.

La Colombe is something of a home-grown Philly coffee hero, starting out in Fishtown, an old industrial area north of the centre, where La Colombe still roasts its coffee. Since my first visit in March 2014 and my return a year later, La Colombe has opened a flagship new store in Fishtown itself, converting an old warehouse into a go-to location for breakfast, brunch and, of course, coffee.

It’s a large, rambling, high-ceilinged space with multiple seating options and a rum distillery at the back. And why not? All the food is cooked in an open-plan kitchen behind the counter, reminiscent of Caravan, King’s Cross and Paddington’s KuPP, although unlike those two establishments, La Colombe’s kitchen closes at four o’clock. All the bread’s baked here too!

The coffee is, of course, excellent, with espresso, bulk-brew and hand-pour filter, supplemented by beer and wine. And cake, naturally.

From the street, La Colombe’s flagship store looks anything but flagship. Greg Cohen, of Coffee Guru App fame, my go-to coffee-source in Philadelphia, had been raving about it for almost a full year and very kindly drove me out there on my first day in Philadelphia. However, when we pulled up outside, my first thought was “is that it?”.

Step inside, though, and I guarantee you’ll experience a wow factor second to none. To start with, it’s huge: tall, surprisingly wide and stretching back in the far distance. It’s also spacious, having resisted the temptation to cram too much in. The entrance, a typical double set of glass doors, forming an airlock-system, opens to a broad expanse, across which is the counter, where you wait to order in front of the massed ranks of cake.

The counter occupies half the width of the store, starting against the left-hand wall before turning sharp left and running off towards the back. Between it and the windows on the left is a retail area, with plenty of space to peruse the coffee and coffee-making kit. Meanwhile the seating’s on the right.

First, opposite the coffee machines, is a long bay with a padded bench-seat, two-person tables in front of it. Next, opposite the kitchen, a long, stand-up bar with an amazing mural on the wall behind. Then comes another bay, with another padded bench, beyond which, the counter comes to an end on the opposite side, leaving even more space for seating. Once again, La Colombe has resisted the temptation to cram, leaving a set of well-spaced tables with benches, and fancy seats with coffee tables.

Finally, up three or four steps, there’s another long, communal table, with the rum distillery to the left, behind glass. To the right there are offices behind a wall housing La Colombe’s wood store (for the wood-fired ovens), above which there’s a coffee lab/cupping area.

La Colombe roasts several espresso blends which I tried extensively on my visits to Dilworth Plaza and Lafayette Street and a number of single-origins. During my visit, the Nizza blend and a Zambian single-origin were on espresso, with another two on bulk-brew. Finally, three single-origins were available as individual pour-overs using a new brewing method, the Silverton. A cross between an immersion and filter brew method, it’s somewhat akin to a Clever dripper (see the gallery for more details).

Greg & I tried the Kenyan Yara Estate through the Silverton. Given my history of troubles with Kenyans, I was pleasantly surprised. A smooth, subtle coffee, with light, fruity notes, it wasn’t too sharp or juicy, which is my usual complaint with Kenyans. My only disappointment was that it didn’t mature much as it cooled. I followed this up with an excellent chocolate-chip cookie; rich, chewy but not too sweet.

The other draw is the food, so we had to have lunch. I selected a special, the BBQ bean skillet topped with a fried egg. It too was excellent, tasty and filling, reminding me that I should eat (good) beans more often!

December 2015: La Colombe was a runner-up for the Coffee Spot Best Breakfast Award for 2015.