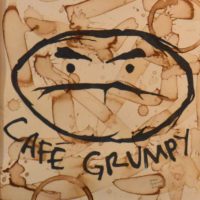 I first came across Café Grumpy in 2015, the Aussie-owned coffee shop/roaster chain firmly establishing itself as one of my New York City favourites. In particular, its Lower East Side and Fashion District locations become regular stops on my various visits. Since I’m staying in Chelsea this time around, I was looking forward to returning to Café Grumpy on W 20th Street, where I had my first Café Grumpy experience. My only problem is that it recently closed, forced out by a new landlord who wouldn’t renew the lease.

Deprived of my local Café Grumpy fix, I headed across the East River to Greenpoint in Brooklyn, seeking out the original Café Grumpy on Meserole Avenue. Home to Café Grumpy since 2005, the roastery is half a block away down Diamond Street. From the outside, it looks small, tucked in on the corner, but inside it goes a long way back, making it the most spacious of the Café Grumpys (now up to 10 in New York City, with one in New Jersey and another in Miami). There’s the usual offering, with the Heartbreaker blend, a single-origin and decaf on espresso, plus batch-brew, a range of tea and a selection of cakes and pastries.

Café Grumpy is in a residential area of Greenpoint in northern Brooklyn, where it occupies the ground floor of an old, three storey brick building on the corner of Meserole Avenue and Diamond Street. Other than Café Grumpy in Chelsea, my experience of various Café Grumpy locations is that they tend to be on the small side, an impression reinforced from the outside of the Greenpoint location.

Although the address is Meserole Avenue, the door is on the corner at 45° to both it and Diamond Street, with a single, large square window on either side, each home to a bench, shelter provided by a red awning. However, if you look carefully (I didn’t, so missed them) there are three two-person tables spaced out along Diamond Street, which is a clue to what’s to come.

Stepping inside, the impression of smallness continues, although the space does extend to the right, past the window on Diamond Street. The counter is opposite you, in the back, left-hand corner, while the seating is at the front, with a long, eight-person communal table in the window and a row of three round, two-person tables between it and the counter.

The right-hand side is free of seating, other than a single bench to the right of the door. This is the domain of the fridge, while on the back wall, the retail shelves, with their bags of coffee and Café Grumpy merchandising, shares space with a pinball machine. However, if you look more closely, you’ll see a wide corridor in the back wall, starting on the left, just beyond the counter. Follow this and the illusion of smallness is shattered when you step into Café Grumpy’s spacious back room, which occupies the remaining length of the building along Diamond Street.

The bulk of the seating is back here, arranged in the three rows. Immediately to your right is a large, square table, with the toilets opposite on the left. Carrying on, a row of three large four-person tables runs next to the exposed brick wall which starts after the toilets, with another four small, round two-person tables in the middle. Finally, against the right-hand wall, are three tall cocktail tables, each with two tall yellow stools. It’s very calm back here, with light provided by three tall, narrow windows in the right-hand wall, which is also where you’ll find the power outlets.

Turning to the coffee, the offering was very familiar from my previous visits to the various Café Grumpy, the only difference being a lack of pour-over, with just a batch-brew option for those wanting filter coffee. There is more choice on espresso, where the ever-present Heartbreaker seasonal blend is joined by decaf (from Peru) and a single-origin option, in my case the Guatemala Pintado, which I had as an espresso.

This was my second Guatemalan single-origin of the day, following on from one I’d had that morning at Patent Coffee, which meant that I’d started and ended my day with Guatemalan espresso. The Café Grumpy offering was very different, producing a fuller, more rounded shot than the one at Patent, but with less distinctive flavours. I paired this with a very fine slice of the lemon loaf, a rich cake with a subtle, lemony topping, a fitting end to my day.

Before I left, I dropped off a bag of Rwandan coffee from Ebbw Vale’s Big Dog Coffee. I’d bought it the week before in Nomad Coffee Co. in Shrewsbury, leaving it as a gift for the staff. I also bought a bag of the Malacard B – Orange from El Salvador, which I gave in turn as a gift to the staff at Monach Coffee in Kansas City.

You can also see what I made of Café Grumpy’s Lower East Side and Fashion District locations, as well as the Chelsea and Nolita coffee shops (both now closed)

Liked this Coffee Spot? Then check out the rest of Brooklyn’s speciality coffee scene with the Coffee Spot Guide to New York City.