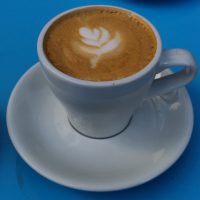 Monarch Coffee is in Kansas City, which, despite the name, is in the state of Missouri, meaning that I’ve yet to visit Kansas, although I did manage to visit five states (Tennessee, Kentucky, Iowa, Nebraska and South Dakota) for the first time on the road trip which tempered my disappointment. The coffee shop we visited occupied a large, double unit on the corner of Broadway and Knickerbocker Street. We sat outside with Fergie, Amanda’s dog, although the interior was lovely and I’m hopeful that another coffee shop will take over the lease since it’s a fabulous space, with windows along the front and down the right-hand side. I was also taken by the panelled ceiling.

The interior had a European feel to it, with two rows of small, round, two-person tables to the right of the counter, plus a window-bar down the right-hand side. Alternatively, there was a long communal table in the smaller space to the left of the island counter, with more tables beyond that. Meanwhile at the back, two broad alcoves flank a broad flight of stairs that lead to a downstairs function room, while to the right of the stairs is a lovely three-sided booth built into the back wall.

Turning to the coffee, which is all roasted in-house (and which, I must stress, is all still available, since Monarch is continuing as a roaster), we sampled a reasonable selection. Len had the batch brew, which was the Gaturiri AA Kenya during our visit, while Amanda had a cappuccino, which I’m pleased to say came in a 5½ ounce cup. Meanwhile, I’d spotted the one-and-one on the menu (a single espresso and a piccolo) so naturally I went for that. We also sampled the cakes, with Amanda having a proper scone (rather than the American variety), while I had a very fine spicy ginger cookie.

Len professed himself very happy with his filter coffee, while Amanda enjoyed her cappuccino, getting notes of lemon with hints of dark chocolate. The cappuccino, along with my one-and-one, was made with Monarch’s Emissary Blend, current a mix of the naturally-processed Santa Isabel from Colombia and the washed San Jose del Lago from Guatemala. On its own in my espresso, the Emissary was quite sweet, although it became more acidic on the second sip. Meanwhile, in milk I found that it was produced some classic notes.

Before I left, I gave the staff a bag of the Malacard B – Orange from El Salvador, which I’d bought at Café Grumpy in Brooklyn at the start of my trip. To keep the chain going, I bought a bag of the Kanzu Lot #21, a washed coffee from Rwanda which is currently on its way with me to Austin, Texas. However, when the staff heard what I was doing, they insisted on gifting me a bag of the La Estrella Gesha from Colombia, which Amanda and enjoyed when we got back to Georgia at the end of the road trip.