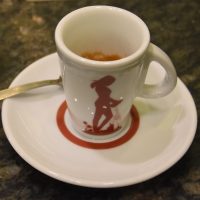 Tazza D’Oro (Cup of Gold) is a famous Roman espresso bars, located in the city’s historic centre, just north of the Pantheon on the corner of Via Degli Orfani, a narrow alley running north, and an even narrower alley, Via dei Pastini, running east. It has an interesting, step-like structure, with the front, facing Via Degli Orfani, split into two, the left-hand side (No. 84) set well back from the right-hand side (No. 85). There are four doors, including one each in the two front sections, a third in the middle section that joins them, and a fourth around the corner on the right on Via dei Pastini. You can use any of the doors, although the main entrance is the left-most one, in No. 84. It’s best to enter this way, using any of the other doors to leave a few minutes later when you’ve finished your coffee.

Tazza D’Oro’s step-like structure is reflected inside, where it’s split into three main areas, four if you count the retail section. This is directly ahead as you enter, through a wide opening in the back wall. Head in here if you just want to buy coffee beans (or merchandising). Alternatively, turn right and join the queue for the till, which is against the back wall on the right-hand side, in front of a long, impressive menu of espresso-based drinks, although I’ve never gone beyond “an espresso, per favore” (or the very occasional cappuccino).

This is an important part of Italian coffee culture. You order and pay at the till, then go to the counter to hand over your receipt in exchange for your coffee. Whatever you do, don’t try to order at the counter!

Tazza D’Oro has two large counters. The first runs back-to-front along the connecting side and is inevitably the busier of the two. If you keep going around the corner, there’s a second counter running along the back of the right-hand side. Both have large, four-group La Cimbali espresso machines, although there’s a shiny new M100 at the back of the first counter.

Naturally I ordered an espresso and drank it, standing up at the counter, although there are a handful of benches if you want to sit and enjoy your coffee. Now for the important question: what was it like?

My recollection of Tazza D’Oro’s espresso is that it wasn’t like the Italian espresso I’d become used to. With the benefit of hindsight, I was tasting the fruitier notes that I’ve now become used to in speciality coffee. Returning to it after 10 years, it was more bitter than I remember, but nowhere near as bitter as the other espressos I’ve tried on this trip. Having steeled myself for disappointment, I actually quite enjoyed it. If you’re looking for a slice of classic Italian espresso bar culture, I’d thoroughly recommend Tazza D’Oro.

Note: if you’re looking for a different (but still traditional) Italian espresso bar experience, try Sant’ Eustachio Il Caffè on the other side of the Pantheon. Meanwhile, if you want a traditional espresso bar, but with speciality coffee, Roscioli Caffè is a must!