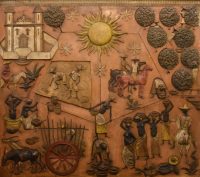 When I first came to Rome almost 20 years ago, there were two venerable espresso bars in the centre that came to my attention: Tazza D’Oro, and, on the other side of the Pantheon, today’s Coffee Spot, Sant’ Eustachio Il Caffè. Located on the Piazza Di Sant’Eustachio, it actually predates Tazza D’Oro by six years, having first opened in 1938 and, like Tazza D’Oro, it’s a classic Italian espresso bar, although it also has outdoor seating.

So, what did I make of it? You can find out after the gallery.

Whereas Tazza D’Oro is visible when standing in front of the Pantheon, I always struggle to find Sant’ Eustachio Il Caffè, particularly in the days before Google Maps. I think of it as behind the Pantheon (ie to the south), but it’s actually to the west, a couple of streets away on Piazza Di Sant’Eustachio, which, despite the name, is more of a street than a square.

Sant’ Eustachio is quite small, with a simple, square opening which doubles as a window, while outside on the pavement, there’s a solitary table to the right of the door, with a row of seven tables to the left. Alternatively, head inside, where you’ll find a small, rectangular space, with the till on the right, just inside the door. Beyond this is a display case for the cakes and pastries, with glass cylinders above, holding retail coffee beans, wood-roasted on-site. Finally, beyond that in the right-hand back corner, is a retail area with merchandising and bagged-up coffee. Unlike Tazza D’Oro, there’s no separate retail till, so once you’ve grabbed a bag, you’ll need to head back to the till and join the queue with everyone else.

The rest of the space is given over to the counter, which starts against the left-hand wall, immediately next to the door, where you’ll find the first of two espresso machines. It then runs the length of the wall, before curving around for a short way on the back wall, ending with the second espresso machine. As usual, find a space at the counter and hand over your receipt: in return you’ll get a saucer (your promise of the coffee to come) and a glass of water.

An important point to note is that at Sant’ Eustachio, the coffee comes with sugar by default, so if you don’t want sugar, it’s important that you ask before it’s made. The resulting espresso, with or without sugar, is a very different beast to a typical Italian espresso, with an incredibly rich, foamy crema unlike anything I’ve seen elsewhere. Quite how the baristas get the espresso to extract like that, I really can’t tell (sadly the espresso machines are massive hulking things and, unlike Tazza D’Oro, there’s no angle where you can watch what’s going on).

Whatever is done, it produces an espresso that’s also very different in taste. I remember that I didn’t really like the coffee during my early trips to Sant’ Eustachio, much preferring Tazza D’Oro, but on my return, I found it more to my tastes. The method produces a naturally sweet espresso (I ordered it without sugar), the rich crema giving it a very different mouthfeel. Amanda, my coffee-tasting buddy on this trip, liked it too.

Whatever your tastes in coffee, you really should give Sant’ Eustachio a try, just for the experience and the contrast to other Roman espressos.