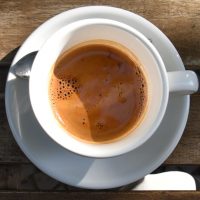 Continuing my exploration of Berlin’s excellent speciality coffee scene, Five Elephant is just a short stroll across Görlitzer Park in Kreuzberg from Monday’s Coffee Spot, 19grams. Another of Berlin’s well-known roasters, this is where it all started for Five Elephant, when it opened the first of its (currently four) coffee shops 10 years ago on the leafy Reichenberger Straße. It’s still the heart of the operation, with all the cakes being baked just along the street and the roastery (sadly not open to the public) just around the corner on Glogauer Straße.

Five Elephant Kreuzberg styles itself as a coffee and cake shop and that’s exactly what it is. Occupying two rooms on the ground floor of a lovely old Kreuzberg tenement, there’s as much seating inside as there is outside on the broad pavement, where you enjoy the shade of some magnificent, mature trees. When it comes to coffee, there’s a single-origin on espresso with another batch brew filter, both changing daily from a seasonal selection of beans, typically five espresso roasts and five filter roasts, all of which are available to buy in retail bags. And then there are the cakes. Such gorgeous cakes…

Five Elephant is on the north side of Reichenberger Straße, a quiet, tree-lined street in Kreuzberg. There’s a central door, with a large, square window to the left, along with a narrow window in the thick stone wall off to the right. Five Elephant makes good use of the broad pavement for its outside seating, which is a draw on a par with the coffee when the weather is good, like when I visited early one Sunday evening. Sitting in the dappled sunlight as it came through the leaves of the trees was very special.

A rectangular four-person table stands in front of the large window, with another just off to the side of the narrow window, which, during the COVID-19 pandemic, has become the takeaway window (you can’t order here, but to prevent people from gathering inside while their coffee is being made, customers are requested to go outside, where their coffee is handed to them through the window). There are six smaller, square tables, each seating three or four, all in a row on the other side of the pavement by the tree trunks, with a seventh of these small tables a little bit further off to complete the set.

Inside is just as special, Five Elephant occupying a pair of high-ceilinged rooms, with whitewashed walls and wooden flooring. The walls, meanwhile, are decorated with maps of the world showing climate and vegetation. I don’t know what it’s like in the height of summer, but during the late spring evening I was there, it was delightfully cool.

The front room is home to the counter, which starts at the back on the right, before running across the room at 45° to the right-hand wall, where a wall-bar extension continues to the window at the front. This is mirrored by a standalone bar just to the right of the door which runs about halfway back. In pre-pandemic times, this provided additional seating, but now it offers a display of retail bags of coffee and some coffee kit.

Talking of seating, a broad wooden bench runs along the left-hand wall from the window at the front to the wall at the back, lined with three tables. The first two are long and rectangular, each seating four, while at the back is a smaller, square table that seats three. However, that’s not all, with an opening in the back wall leading through to a smaller back room. This has two more tables on the left, the first seating three, while the second takes two. There’s another broad wooden bench here, although the tables have stools rather than the chairs you’ll find at the front.

Having eaten at 19grams, I was in the mood for coffee and cake, so I’d definitely come to the right place. Although I’d had Five Elephant coffee a few times in the UK, this was the first time since London Coffee Festival in 2019. I liked the look of the naturally-processed Sitio Joaninha from Brazil, that was on espresso, so I ordered that, which once again was served in an over-sized cup. This was excellent, with a fruity hit on the first sip, after which it became a little more subdued.

I paired this with the last lemon tart, although I was very tempted by the cheesecake, which I turned down since it would have been my second of the day. As it was, my lemon tart didn’t disappoint, with a fine pastry case and a slightly runny filling. This has just enough lemon to give it a sharp edge, but without being overwhelming, the perfect end to my day.