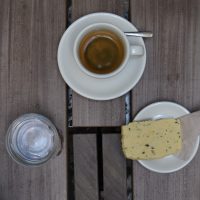 Exactly two weeks ago today, I left Berlin after a whirlwind couple of weekends exploring the city’s excellent speciality coffee scene. Along the way, I hit up some legendary names whose fame has spread far beyond Germany, including The Barn, Five Elephant and Bonanza Coffee. Another coffee shop chain with a roastery in Kreuzberg, Bonanza is fairly small, just two coffee shops in addition to the original roastery/coffee shop. It’s also venerable (in speciality coffee terms), founded in 2006.

The subject of today’s Coffee Spot is something of a rarity: a Berlin speciality coffee shop in a mainstream tourist setting. Located on Jägerstraße, just south of the famous Unter den Linden, Bonanza Coffee is right next to Gendarmenmarkt, one of Berlin’s most picture-perfect squares. Bonanza occupies an interesting series of spaces, with a handful of tables outside on the pavement and more seating in a lovely interior courtyard. And then there’s the coffee, with two choices on espresso (a blend for milk-based drinks and a single-origin for espressos/Americanos) plus two single-origins on batch-brew. These are all roasted in Kreuzberg, with even more beans available in retail bags. If you’re hungry, there’s a selection of cakes to go with your coffee.

Bonanza Coffee is on the western side of Gendarmenmarkt, just before on Jägerstraße’s junction with Charlottenstraße. Initially, there doesn’t seem to be much to it, with four small tables and a handful of metal chairs outside on the busy, crowded street. Each table shelters under a large, green parasol, two next to the road, with the other two in front of Bonanza’s two tall, arched windows. Access is via a wide arch to the left of the windows, a broad passageway leading back to the interior courtyard of an old-fashioned apartment building. To the left is a jewellers’ shop, while to the right a door leads into Bonanza, best described as occupying a glass-sided cube.

To the right are the two tall, arched windows that overlook the street, while the front (facing the central passageway) has another two arches, a central one with the doors, the second to the left. Finally, two more arches in the left-hand wall look onto another passageway. The counter is at the back, while there is very limited seating, just a two-person bench in the arch by the door and a four-person window-bar in the first of the windows overlooking the street.

Initially I thought that was it, but Bonanza has hidden depths. Returning to the passageway, there’s a second glass-sided cube on the right, separated from the first by a short passageway with a pair of two-person tables, one on either side. Carrying on brings you to another pair of doors which lead into the second cube. There’s more seating here in the form of black-topped benches with small wooden tables, two to the right, one against the back wall and a fourth to the left.

Finally, and best of all, the passageway opens onto the internal courtyard, which is ringed by apartments, six storeys high. There’s more seating here, with a wooden bench to left, plus two small, square coffee tables. A long, low stone flowerbed runs left-to-right across the middle, with more seating on either side. Another two benches stand in front of the flowerbed, with three of the small, square coffee tables, while on the far side are two metal sofa-benches, each with two chairs, a metal coffee table in the middle of each set.

This is Bonanza’s best kept secret, with few people seeming to know about it, so it was quiet even when shop at the front was very busy. I sat out here, really enjoyed the tranquillity, the only problem, common with many outside spaces in Berlin, being that you share it with the smokers.

You order at the counter in the first glass cube, where a neat queuing system funnels you to the left, past the retail shelves holding the bags of coffee, to the till. You’ll also find the small cake selection here, along with two flasks holding the day’s batch brew options.

It’s rare to see a roaster put its best coffee on batch brew, but Bonanza bucked that trend with two micro-lots, the El Injerto from Guatemala (retailing at €29 for a 125 gram bag) and the La Laguna Anaerobic from Costa Rica (so popular, it had sold out). The staff gave me samples of both and I was sufficiently impressed with the El Injerto to buy a bag. The La Laguna was even better: complex, sweet and very, very weird.

However, I’d actually come for an espresso, all the shots pulled on a gleaming Slayer Espresso v3 on the right-hand part of the counter, which you pass on your way out once you’ve ordered. There are two grinders, one with the Bonanza Blend (for milk-based drinks) and the other with a single-origin, the Sasaba, a naturally-processed coffee from Ethiopia, which I had as a double espresso. This too was lovely, a fruity, complex espresso which I paired with the excellent shortbread, rich, buttery and crunchy, all enjoyed while sitting out in the courtyard.

You can see how I got on when I visited the Bonanza Coffee Roastery the following day, where I had a filter tasting flight, trying three different single-origin filters, including a very funky anaerobic natural from Indonesia and the Sasaba from Ethiopia that I’d had as an espresso at Gendarmenmarkt.