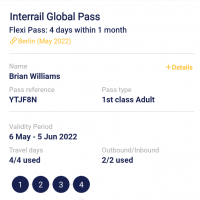 In the years running up to the COVID-19 pandemic, I travelled an awful lot for work, which mostly meant flying to various locations around the world, including trips to Rome and Prague. In 2020, I made a conscious decision to travel to European destinations by train wherever possible. I even had a trip to Stockholm lined up, with all the tickets booked, for April 2020. And then COVID-19 happened.

When work announced that face-to-face meetings would resume in May 2022 after a gap of more than two years, the first meeting was in Berlin. True to my word, I decided to travel by train, even though flying would have been much more straightforward, quicker and, arguably, cheaper. The resulting trip involved eight trains spread over three days (with a bonus day out by train thrown in for good measure).

While the individual train journeys will be covered by in future instalments of this Travel Spot series, I wanted to start with a post about planning the trip. While I’m a great fan of train travel, preferring it over flying whenever possible, this trip was neither straightforward to plan or book, something which needs to change if we’re to encourage more train travel.

If I had decided to fly, it would have been relatively simple to book the flights and, other than getting to/from the airports at either end, that would have been that. I’d have also earned airmiles and status points, further rewarding me for my choice and further incentivising me to take the plane over the train. Instead, going by train involved a lot of planning which, while it can be fun, will also put a lot of people off.

I started, as ever, with the wonderful Seat 61, where you’ll find a section dedicated to getting from London to Berlin by train, which is easily doable in a day, particularly if you are starting/ending your journey in London. There several potential routes, but I chose the most straightforward one, starting with the Eurostar from St Pancras International to Brussels Midi, where you change trains for either a Thalys or ICE high-speed train to Köln (Cologne). From there, it’s an ICE to Berlin, typically via Hannover. Each of the first two trains take about two hours, while from Köln to Berlin, it’s roughly four hours. So if you allow half an hour for a change of trains at each station, you can do it in about nine hours.

In my case, I also had to allow for getting to St Pancras from Guildford, which, once you include the 1½ hour check-in time, made it more like an 11½ hour trip. If you want to add in the 30 minutes it took me to get to my hotel in Berlin on the excellent public transport system, let’s call in a round 12 hours. In contrast, flying would probably have taken under seven hours, from Guildford station to my hotel.

In theory, the return journey was just a case of retracing my steps, except that rather than returning to Guildford, I was going Flint in North Wales. It’s (just about) possible to do Berlin to Flint in a single day, albeit with a very early start, but I wanted to make the most of travelling by train and break my journey back. I looked at various options, including going via Hamburg or Amsterdam, as well as spending a few days in Brussels on the way back. In the end, however, I decided to retrace my steps, but break my return journey in Köln, travelling from there to Flint in a single day at the end of the trip.

The next step was to book trains, where I had two options. The first was to book the individual trains directly which, if done far enough in advance, can be pretty cheap. The alternative is to buy a Eurail pass, which provides a great deal more flexibility.

When I first travelled by train in Europe in the 1990s, these were known as Interrail passes and aimed firmly at the youth market (27 and under). These days, various passes are available for all age ranges, all under the Eurail brand. I selected the cheapest option, the four-day Interrail Global Pass, which allowed me to travel on four separate days in a 31-day period. Crucially, the first and last of these days also allows free travel within your country of origin, in my case the UK.

Given how eye-wateringly expensive train travel in the UK can be, even when booked well in advance, this tipped the balance in favour of the Eurail pass. Since I was travelling for work, I opted for the first class option, which is €328 (second class is €246). To give you an idea of how expensive train travel is in the UK, that works out at roughly £275, whereas an open, first class return from Flint to London is £460. While there are ways to do that journey more cheaply, that’s a whole article in itself (and another level of complexity/planning that I could do without).

You might think that, having purchased a Eurail pass, this was the end of the matter. However, I still had some more planning to do, which you can read about after the gallery.

One of the Eurail’s big advantages in Belgium and Germany is the flexibility it provides. You can travel on any train, including Germany’s flagship high-speed ICE services, at no extra cost (although there is a supplement if you want to use the Thalys service between Brussels and Köln). However, while you can travel by Eurostar to/from St Pancras International with a Eurail pass, there’s a supplement of €38 (€32 in second class) plus a €2 reservation fee. What’s more, you have to book a seat on a specific train, with a limited number set aside on each train for Eurail passes.

Your options for booking depend on what type of Eurail pass you buy. The first option is a paper pass, but having read the excellent guide to Eurail passes on the Seat 61 website, the alternative, the mobile Eurail pass, seemed best suited to my needs. This meant that everything was on an app on my phone, where I could plan journeys before adding them to my four-day pass (for more on the mobile pass, including detailed instructions on how to use it, please refer to this handy guide by Seat 61).

In theory, I could do everything in the app, including planning my journey and making the necessary reservations. The practice, however, didn’t live up to the promise and I found myself bouncing around multiple websites, although that was partly my own fault since I didn’t know what I was doing when I started.

With hindsight, I recommend planning your journey in the Eurail app or, if you prefer a website, there’s the Eurail website or the excellent German railways (DB) site. All will let you plan the end-to-end journey (in my case, St Pancras International to Berlin), giving you a range of departures and a breakdown of the individual legs for each journey. Once you’ve decided which one to take, you need to book the Eurostar leg.

Unsurprisingly, you can’t do this in the DB website, nor can you do it on the Eurostar website. Disappointingly, the app won’t let you book Eurostar seats either, instead redirecting you to the Eurail website. Even if you use this to plan your journey, reservations are on different part of the Eurail website, which I found somewhat frustrating. However, once I’d worked it all, I found fairly straightforward to use.

One further confusion is that the Eurail and DB websites (but not the Eurail app or the Eurostar website) show the departure time from St Pancras 35 minutes before the Eurostar leaves (to allow for check-in time). Until I worked out what was going on, I was completely thrown by this, particularly I was switching between the app and the Eurail website. However, I finally worked it out and then it all made sense.

I left it rather late to book my outbound journey (10 days before I travelled). By then, my only option was the 09:01 from St Pancras to Brussels. There were seats available on later trains that day, but none that would get me to Brussels in time to complete my journey to Berlin in a single day. As an aside, I went ahead and booked my Eurostar for my return journey two weeks later. Even then, almost a month in advance, several trains were already fully booked!

With the Eurostar decided, the connections between Brussels and Köln, as well as Köln to Berlin, fell into place. You don’t have to reserve seats on the ICE trains, but since I knew which ones I wanted to catch, I decided to make some reservations, just for peace of mind. You can do this through the Eurail website, but reserving via the DB website is a little bit cheaper, so I took that option.

Finally, although you can’t specify a seat when you book your Eurostar, you will get an e-mail with a reservation number. Once you’ve got that, you can go to the Eurostar website and change your seat there.

If all this sounds rather complicated compared to booking a flight, it is. While the process involves multiple train companies, in my case it was only two (Eurostar and DB). Even then, it was too complicated, involving too many websites. If train operators are serious about promoting wider European train travel, particularly to/from the UK, they need to make the process far simpler than it currently is.

This concludes the first instalment of my Travel Spot series covering my journey to Berlin by train. You can read about the first leg of my journey, by Eurostar to Brussels, in Part II, while my ICE from Brussels to Köln is covered in Part III. The final leg of the journey, onboard another ICE, this time from Köln to Berlin, is the subject of the final instalment, Part IV.

5 thoughts on “Brian’s Travel Spot: UK to Berlin by Train, Part I – Planning”