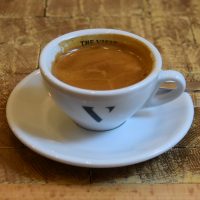 Just two weeks ago I was in Berlin, at my first face-to-face work meeting since early 2020. It was also my first to Berlin in the Coffee Spot era. My initial research suggested that speciality coffee was to be found in the east, in Mitte, Prenzlauer Berg and Kreuzberg, whereas I was in a hotel in the heart of old West Berlin, just to the south of the Zoological Garden, an area where speciality coffee was in short supply.

Fortunately, this proved to be an overstatement, with both Five Elephant and The Barn having locations within easy walking distance. Unfortunately, they didn’t open until 11:00, which is where The Visit Coffee & Eater came in. Literally down the street from my hotel, and opening at 07:30, I could walk over, grab a flat white and make it back before the start of my meeting.

As well as some excellent coffee on espresso, batch brew and pour-over, as the name suggests, The Visit is one of those rare Berlin coffee shops that also does food, with an interesting brunch menu, plus a range of bagels, cakes and pastries. There’s plenty of seating outside on the pavement, as well more tables inside.

The Visit is a small chain of (for now) four Berlin coffee shops, beginning in 2016 with the original coffee shop/roastery on Adalbertstraße in Kreuzberg (also home to Bonanza Coffee and KaffeeKirsche) . The Visit Coffee & Eatery on Nürnbergerstraße was the third of the four, opening a year ago, in a row of shops and restaurants on the ground floor of a magnificent old apartment building. From the street, it doesn’t look like much, with a large picture window on the right and the door on the left.

Three round three-person tables cluster in front of the window, sheltered from both sun and rain by an awning which projects from the shopfront. There’s also a two-person table to the left of the door, although this lacks the awning’s protection. A row of tables stands on the other side of the pavement next to the edge of the road, where you’ll typically find a pair of picnic-style tables and two low tables with stools. I say typically because the staff are very flexible with the outside seating. On the bright, warm Saturday morning I was there, everyone wanted to sit outside, so the staff progressively moved tables from the interior to the pavement with the arrival of each new customer!

While The Visit doesn’t look much from the street, it stretches a long way back, all the way to the inner courtyard of the apartment building, which is overlooked by a window at the back, making for a very bright space. A large counter, set back from the window, dominates the right-hand side, with the coffee at the front, giving way, beyond the cakes and other treats, to an open kitchen where the brunches are cooked.

The seating starts with a six-person communal table to the right of the door, occupying the space between the window and counter. Five tables line the left-hand wall opposite the counter, with three square, two-person tables followed, after a pillar, by another two round, three-person tables. Probably the best seat in the house occupies an alcove beyond the kitchen, where there’s another six-person table, this time with benches against the walls.

You order at the front of the counter, where you’ll find the drinks menu on the wall and the food menu on the counter-top. Take a seat and your coffee will be brought to you. In all, I visited eight times, first on the Saturday for a cortado, then each day the following week for a morning flat white in my HuskeeCup, culminating in a lunch-time visit on Friday. I also popped in during breaks in my meeting for an espresso and a pour-over to go (a Kenya Karimikui through the V60) in my Frank Green Ceramic cup.

The pour-over was lovely, sweet and well-balanced, while the espresso, cortado and flat whites were made with a single-origin Brazilian. On its own, this was surprisingly bitter, with a fruity first hit. It really excelled in milk, producing a rich, creamy drink with the coffee coming strongly through. Finally, for lunch, I had the baked egg avocado. At first, I couldn’t see the egg, but then realised that an egg yolk had been placed in each half of the avocado, occupying the hole left by the stone. I was, perhaps, more taken by this idea than I should have been!

While I was there, I met with Tufan, The Visit’s founder. He told me about the roaster, a Loring S15 Falcon, which roasts all The Visit’s coffee, which is mostly from South America and Africa. Then, sadly, it was time to go, although I remain grateful to The Visit for keeping me caffeinated for the week!