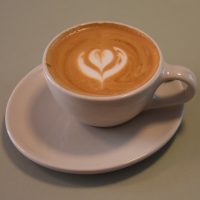 I didn’t know much about Coffee Circle before travelling to Berlin at the start of May. However, enough people recommended Coffee Circle to me once I arrived that I added it to my list. Coffee Circle began as a roastery specialising in direct trade in 2010, only opening its first café three years ago (in Wedding, Berlin, in the same building complex as the roastery). Since then, there have been two more, one on Bergmannstraße near Tempelhof and the other, the subject of today’s Coffee Spot, on Rosa-Luxemburg-Straße in the heart of Mitte.

From the street, there isn’t much to Coffee Circle, but inside, the café goes a long way back, all the way to the rear of the building, where windows look into a modern courtyard. There’s space for 12 people at tables outside on the pavement, while there’s plenty more seating in the spacious interior. A very limited (and entirely vegetarian) snack menu is joined by a selection of cake, but the real draw is the coffee, all roasted in-house, with the Cerrado, a naturally-processed Brazilian coffee, on espresso, joined by a regularly-changing second single-origin option, along with another single-origin on batch brew and two more on pour-over.

Coffee Circle’s Mitte café opened last year on Rosa-Luxemburg-Straße, just north of Alexanderplatz. Located on the ground floor of a modern building on the western side of the street, it catches the morning sun, with the pavement tables only having the partial shade of a single parasol, plus the branches of a neighbouring tree. Coffee Circle has a simple façade, with the glass door on the left and two white-framed floor-to-ceiling windows on the right. There are six two-person tables outside, arranged in pairs, each seating four people, one pair in front of each window, with the third off to the right, sheltering under the branches of the tree.

Inside, Coffee Circle goes a long way back, a long, thin building which extends to the rear windows, where, in true Berlin fashion, you have a view of the leafy, inner courtyard. The seating is mostly at the back, while the front is split between retail shelves on the left and the large, L-shaped counter, which is set back on the right, leaving space for a window-bar to the right of the door, seating three on tall stools.

The façade’s clean, white lines continue inside, with pale woods and off-white paint predominating. These combine with the windows and open areas to create a huge sense of space, particularly at the front, where there’s nothing between the retail shelves on the left and the counter on the right.

Beyond the shelves/counter, the rear half of Coffee Circle is similarly split into two, with a dividing wall running along roughly the same line as the counter’s edge. To its right is the toilet and storerooms/staff-only spaces, while to the left is the bulk of the seating in what is, in effect, a long, thin room with an open front and windows at the back. Eight two-person tables line a bench against the left-hand wall, while a bar with six tall stools runs against the dividing wall on the right.

You order along the side of counter, with the cakes to your left, the menu on the wall directly ahead of you and the Synesso S200 espresso machine at the front of the counter to your right. You’ll also find the snack menu (a choice of a mushroom and spinach toastie, grilled cheese and granola during my visit) and the current selection of coffees, all of which (and more) are available to buy in either 350 g or 1 kg bags.

Coffee Circle has a house espresso, the Cerrado, a naturally-processed coffee from Brazil, plus a second single-origin which changes on a regular basis. While I was there, it was the Jhai, a single-origin Robusta from Laos, which, if I hadn’t already been overcaffeinated, I would have loved to try. Alternatively, there’s filter coffee, with the choice of the APAS, another naturally-processed coffee from Brazil on batch brew, or, on pour-over, the Jadae, from Myanmar, and a classic Yirgacheffe, from Ethiopia.

With so much choice, I bailed out somewhat, ordering a flat white. That said, it was a particularly fine flat white, with the rich, fruity coffee going really well with the milk, while the non-circular saucer intrigued me. And that was that, my all-too brief visit to Coffee Circle at an end. However, I’ll be sure to be back on any future trips!