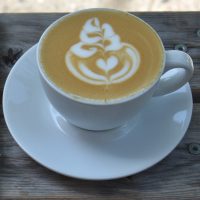 I am indebted to my friend and fellow coffee blogger Bex, of Double Skinny Macchiato fame for bringing Nano Kaffee to my attention. Bex visited Berlin in December 2018, and her first stop was Nano Kaffee, where she very kindly bought me a bag of the Kikirima, a single-origin from Kenyan which I enjoyed through my V60. Naturally, when I decided to go on a mini-tour of Kreuzberg on my last Sunday in Berlin, I too had to start with a visit to Nano Kaffee.

Nano Kaffee is on Dresdener Straße, a quiet street that connects Oranienplatz with Kottbusser Tor, where there’s a convenient U-Bahn station. Like almost all of the speciality coffee shops that I visited in Germany, Nano Kaffee, which opened in 2014, is both a roaster and a coffee shop, although unlike many of its contemporaries (such as Bonanza, The Barn, Five Elephant and 19grams), it only has a single coffee shop (although a second hasn’t been ruled out).

Nano Kaffee is a delightful spot, with a simple, open layout and plenty of outdoor seating on the quiet street. There’s a very concise espresso-based menu, plus batch brew filter, tea, hot chocolate and a small selection of cake.

Nano Kaffee is just south of Oranienplatz, a lovely area for a Sunday-morning stroll. It’s one of a number of cafés and restaurants on the ground floors of various apartment buildings on the eastern side of the quiet, tree-lined Dresdener Straße. It occupies a double-bayed shop, with large windows on the left and right, the door inset into the right-hand side of the left-hand window.

There’s plenty of outside seating, starting with an L-shaped bench arrangement in front of each window. The long part of the L runs under the window, the short part extending out onto the pavement. The shorter bench to the left of the door has three wooden stools acting as tables, while there are four such stools in front of the bench to the right.

There’s more seating on the other side of the pavement, where a narrow strip of road has been reclaimed by some rather incongruous red and white striped plastic crash barriers. Starting opposite Nano Kaffee, they run north along the street, providing additional seating for several cafés and restaurants, including Nano Kaffee, which has four two-person tables just beyond the edge of the kerb.

Nano Kaffee occupies a simple space which was obviously once two separate shops, although all that remains of the party wall is a short stub extending from the middle of the back wall to create two alcoves. The result is a square space with high ceilings and a minimalist design, highlighted by clean, whitewashed walls. The seating is all on the right, a bench running the length of the wall and along the back of the alcove. Six round tables line the bench along the wall, with another one in the alcove, each with a pair of low, three-legged stools for additional seating. Note that Nano Kaffee has a no laptops policy.

The left-hand side is the domain of the counter, a striking metal affair, the result of a recent refurbishment that saw the replacement of the original wooden counter present when Bex visited. Fans of the yellow painting will be relieved that it has survived. The counter houses the La Marzocco Linea espresso machine and its two grinders, along with the selection of cakes, while beyond that, in the alcove at the back, is the batch brewer and its EK43 grinder. The stub of the party wall, meanwhile, houses Nano Kaffee’s retail coffee selection.

Nano Kaffee was serving a pair of organic single-origins on espresso during my visit, the naturally-processed O Pássaro from Brazil and the washed decaf Chiapas from Mexico, decaffeinated in Mexico using the Mountain Water Process. These are served from a very concise menu offering espresso, long black and (with milk) small (cortado/macchiato), medium (flat white/cappuccino) and large (latte). There’s also another single-origin on batch brew.

I kept things simple for my first coffee of the day, ordering a flat white (medium), the O Pássaro producing a rich, smooth classic. I paired this with a kouign-amann, another classic, this time with a crunchy exterior and sweet, but not sticky interior, with layers of sugar-infused pastry.

Since this had all started with a gift, I’d brought my own gift for Nano Kaffee, a choice of coffees that I had brought back from my recent trip to New England. The barista selected the Maria Imelda Vallejos, a washed Colombia single-origin espresso that I’d picked up from Gracenote in Boston. In return, I purchased a bag of Nano Kaffee’s Fábrica de Nubes organic espresso, again from Colombia, which I’ve been enjoying through my Sage Barista Express ever since I got home.

Liked this? Then take a look at the rest of Berlin’s speciality coffee scene with the Coffee Spot Guide to Berlin.