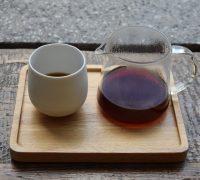 When talking of speciality coffee in Berlin, you can’t avoid The Barn, which now boasts 10 Berlin coffee shops, two more overseas (Mallorca, Dubia) and an international reputation for roasting excellent coffee. It’s all the more impressive considering that The Barn only started 12 years ago with the original Mitte coffee shop. Sadly, I couldn’t make it there, going instead for the next best thing, the original roastery/coffee shop on nearby Schönhauser Allee. The Barn’s second location when it opened in 2012, all the coffee was roasted here until the new roastery/coffee shop opened on Voltastraße in late 2020.

These days, Schönhauser Allee is “just” a coffee shop, a large, welcoming space with a massive counter and plenty of seating inside and out. Unusually, there’s no printed menu, either on the counter or displayed on the walls. Instead, a QR Code invites you online for the latest menu, where you’ll find a standard seasonal offering across all The Barn’s Berlin locations. This includes a concise espresso-based menu, two options on pour-over through the V60, plus cold brew, tea, hot chocolate and a range of cakes. The specific beans (all single-origins) vary by location, chosen by the baristas every few days.

Although close to The Barn’s original Mitte coffee shop, the old roastery is in Prenzlauer Berg, near the southern end of Schönhauser Allee. On the right as you head north from its junction with Torstraße, The Barn occupies the left-hand part of the ground floor of a lovely old building, with seating outside on the broad pavement, although at the time of writing, the once-vacant lot next to The Barn is a construction site while a new building goes up.

The Barn has a broad façade, with three large, tall windows followed by the door at the left-hand end. Three low three-legged tables, each with three large three-legged stools, sit in front of the first two windows, while the third window, immediately to the right of the door, has a long bench and two of the low tables. Finally, there’s another low table, with just two stools this time, by the door.

Stepping inside, The Barn stretches out ahead of you and to the right in an L-shape, going back about as far as it is wide or perhaps even further. The counter, which is diagonally across from you, is also L-shaped, running almost to the right-hand wall, but extended back perhaps half the depth of The Barn. There’s limited seating to your right, with a series of window-bars in the three windows, home to three, four and five stools respectively. Note the “no laptops” rule if you want to sit here.

The bulk of the seating is straight ahead, although a large table, full of retail bags of coffee (espresso facing the door, filter on the other side), separates you from the seating. A bench runs along the left-hand wall, mirroring the counter, with two simple wooden tables, additional seating provided by the ubiquitous stools. The tables are matched by two more, between the wall and the counter. These are narrower, each with a pair of stools.

The rest of the seating is at the back, beyond the counter, starting with a tall communal table projecting at 90° from the wall, equipped with four tall, four-legged stools. The remaining seating is a mix of tables (two conventional round tables with three chairs each) and pallets topped with coffee sacks (four in all, seating again provided by the ubiquitous three-legged stools). These are arranged around the walls at the far end of The Barn.

During my visit, a naturally-processed Huye Mountain from Rwanda was on espresso, while of the two choices for pour-over, I went for the Radiophare, a naturally-processed coffee from Indonesia. This was served in a carafe with a cup on the side, all presented on a neat wooden tray. A lovely, full-bodied coffee, it more than held its own as it cooled, evolving some subtle flavours which I really enjoyed.

In closing, I’d like to thank the friendly staff at Schönhauser Allee, who couldn’t do enough for me (an experience, in fairness, shared across all the coffee shops I visited in Berlin).

June 2022: I bought a bag of the Radiophare, which I gave as a gift to Lou, co-owner of Blooming Skull Coffee in Bebington.

5 thoughts on “The Barn Schönhauser Allee”