Our second shortlist in the 2020 Coffee Spot Awards is the “Best Takeaway Coffee” Award, which was won last year by Workshop Coffee at The Pilgrm. It recognises those places which, braving the elements, still produce an excellent cup of coffee. This includes coffee carts, coffee stalls, those Coffee Spots which are so small that they only serve takeaway coffee and those Coffee Spots where I regularly get my takeaway coffee (even if they offer a regular sit-in option).

Although many coffee shops were only offering takeaway for a large part of the year, I wasn’t travelling very much, limiting myself to visiting my local coffee shops in Guildford, all of whom were serving takeaway and happy to accept my reusable cups. As a result, this year’s shortlist is fairly concise affair.

You can see who is in the running after the gallery. 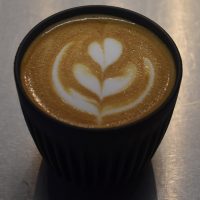 I’m a fairly frequent visitor to Crewe station, changing trains there on a regular basis. As a result, I’ve been to Gourmet Coffee Bar & Kitchen (always on Platform 5, never on Platform 6) many times for a flat white to go. However, this year was the first opportunity I’ve had to write it up. As you might expect, Gourmet Coffee Bar & Kitchen has also been shortlisted for the Best Coffee Spot near a Railway Station Award. 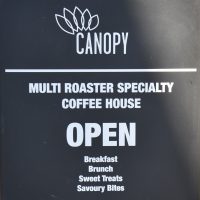 Canopy Coffee in my home town of Guildford has been a favourite of mine ever since it opened. However, with the onset of COVID-19, it successfully reinvented itself as a takeaway only outlet, while staying true to its multi-roaster roots. I had many a flat white to go on my trips into town, sustaining me on my shopping trips. Canopy Coffee is also on the shortlist for the Most Popular Coffee Spot and the Brian’s Coffee Spot Special Award. 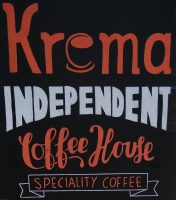 Another entry from my home town of Guildford, Krema followed Canopy in reopening as a takeaway operation during the spring, before fully reopening in the summer. Now, of course, it was switched, fairly seamlessly, I have to say, back to takeaway only. Like Canopy, I have had many flat whites from Krema to sustain me on my weekly shopping trips into town. Krema has also been shortlisted for the Happiest Staff and Most Popular Coffee Spot Awards. 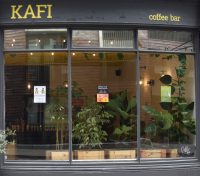 Staying with the theme of coffee shops reinventing themselves as takeaway only, but moving up to London, here’s Kafi, one of my finds of 2019. Originally there were no plans to reopen Kafi during the spring, but demand from locals (who saw the owner in the shop, doing some maintenance) led to a quick about face! Kafi has also been shortlisted for the Most Passionate About Coffee Award.

Moving on, we find ourselves in Chester, where Moss Coffee is another which decided not to fully reopen during the summer and instead to stay as a takeaway only operation. In the case of Moss Coffee, this was very sensible, given its size (small enough to make the Smallest Coffee Spot shortlist) and staffing (a one-person operation from owner, Daniel). Moss Coffee has also been shortlisted for the Best Coffee Spot near a Railway Station Award. 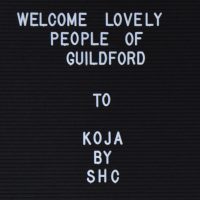 We’re back in Guildford for our next entry, where Koja is carrying on the mantle of Surrey Hills Coffee, taking on its old coffee shop on Jeffries Passage in the centre of town. Initially reopening for takeaway only at the end of the summer, it had just moved back to on-site service when the second wave of restrictions arrived and now its back to takeaway again. Koja is also on the Happiest Staff and Most Popular Coffee Spot shortlists.

Back in London, the tiny Over Under Coffee in West Brompton (tiny enough for a place on the Smallest Coffee Spot shortlist) has always been effectively takeaway only, serving espresso-based drinks, filter coffee and an impressive brunch menu from what is no more than a cube in front of a pub, just across from West Brompton station, which has gained it a place on the Best Coffee Spot near a Railway Station shortlist. 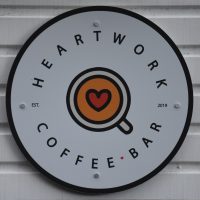 Heartwork Coffee Bar is one of my unexpected finds of the year, earning it a place on the shortlist for the Most Unlikely Place to Find a Coffee Spot Award. It serves coffee to all-comers, including walkers and cyclists, from a horsebox in a farm yard in the heart of the Surrey Hills, which has also earned it a place on the Best Neighbourhood Coffee Spot and Best Outdoor Seating shortlists.

And the winner is Canopy Coffee
Runners-up: Moss Coffee and Koja by Surrey Hills Coffee

If you liked this post, please let me know by clicking the “Like” button. If you have a WordPress account and you don’t mind everyone knowing that you liked this post, you can use the “Like this” button right at the bottom instead. [bawlu_buttons]
Don’t forget that you can share this post with your friends using the buttons below.
END