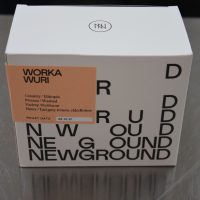 Oxford’s NewGround Coffee began in 2018, although I only became aware of it earlier this year when visiting FLTR Coffee in Bicester. Then, a month later, I popped into The Hideaway, one of Guildford’s many new openings, to find NewGround’s seasonal Big House blend in the hopper. Turns out I should have paid more attention, though, since Bex of Double Skinny Macchiato wrote about NewGround in October last year!

NewGround’s roastery/coffee shop are in a small workshop tucked away off a side street in Headington, east of the centre of Oxford. The roasting side of the business has its own Meet the Roaster feature, while today’s post focuses on the coffee shop. This is best described as minimalist, somewhere between a full-blown roastery/café (like the Ue Coffee Roastery Cafe & Kitchen) and the Heartland Coffee Bar.

There’s a handful of seats, with the coffee being the real star. NewGround offers its seasonal Big House blend plus a single-origin on espresso, along with batch brew filter. You can also have any coffee in the roastery through V60, Kalita Wave or AeroPress. Naturally, it’s all available in retail boxes. If you’re hungry, there’s granola and porridge for breakfast (all day) and a choice of two cakes.

NewGround’s roastery/coffee shop is in Headington, on the eastern outskirts of Oxford, easily accessible from the M40/A40, which is how I came to visit, driving to my Dad’s in North Wales. It’s somewhere you’re unlikely to stumble upon, tucked away in a small courtyard off Windmill Road, itself off London Road, the main throughfare between Oxford and the A40.

Walking down Windmill Road, the only clue is an A-board on the pavement on your right, a short way from London Road. This leads through a gap in the buildings to a small, crowded courtyard lined with an eclectic collection of small, industrial buildings, none of which match. NewGround is at the back on the left, the A-frame front punctured by a tall, four-paned window, with the fourth pane (on the right) acting as the door, while the others look as if they could fold back to the left, opening up the entire front in good weather.

Inside, it’s a simple, open space, with an A-frame roof which runs front to back, every third panel of which is a skylight, resulting in a bright interior. The décor is minimalist, with white, breezeblock walls, a white, concrete floor and blonde wood or metal furniture. The coffee shop, which opened in 2019, occupies the front of the building, with the roastery, which has been here a year longer, at the back.

An enclosed, wooden structure, which matches the height of the walls, occupies one third of the width on the right, and runs about halfway back. Opposite this, to your left as you enter, is the counter, while a bench runs along the right-hand wall of the structure. There’s a small extension with a couple of stools at the end of the counter, with the remaining seating at back, between the counter and the roastery.

After the wooden structure on the right, you’ll find a training bench with seating for five, shared with a Victoria Arduino Eagle One espresso machine and its grinder. Beyond that are two moveable stainless-steel catering tables to the left and right, each seating four. Finally, at the back, is the Loring roaster, all gleaming stainless steel, surrounded by tubs of coffee.

You order at the front of the counter, where you’ll find the granola, porridge and cakes of the day (millionaire’s shortbread and brownies during my visit). Next come two grinders, one for the Big House blend, the other for the single-origin espresso (the El Bombo from Colombia), followed by the Victoria Arduino Black Eagle espresso machine. Then it’s over to filter coffee with the pour-over station, kettles and uber boiler. Finally, at the end is an EK43 grinder and Mokkamaster for batch brew.

Spoilt for choice, I asked the barista to surprise me with a pour-over. My coffee arrived in a glass carafe with a handleless, cylindrical cup on the side (NewGround uses HuskeeCups for some of its espresso-based drinks). The first sip tasted almost earthy and quite full-bodied, but as it cooled, I got a more rounded, well-balanced flavour profile, but still with plenty of body.

I paired this with a bowl of granola, even though it was mid-afternoon (I needed something savoury). This came with yoghurt and fruit compote, providing a really tasty ensemble.

My surprise, by the way, was the Worka Wuri, a washed heirloom varietal from Ethiopia, which I would never have guessed, made using the Kalita Wave. I was so impressed, I bought a box to take home.