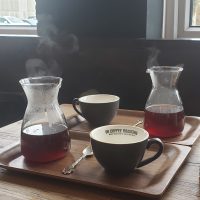 Despite a large, eye-catching sign on the B4047 at the entrance to the Windrush Industrial Park, you’re unlikely to accidentally stumble upon the Ue Coffee Roastery Cafe & Kitchen. That said, it’s easy enough to find, the end-of-row two-storey unit standing out well enough, while there’s free parking in the large car park on other side of Linkwood Road.

The cafe occupies a long, ground floor space at the front of Ue Coffee (which shares the building with sister company, Jeeves & Jericho). There are offices above, while the roastery is at the back, visible through windows behind the counter. Even better, the toilets are in the roastery, accessed via glass double doors to the right of the counter, so you have a legitimate excuse to nose around!

A single glass door, reached by a long, shallow ramp, leads into the right-hand end of the cafe, which stretches off your left, occupying the next three windows along the front of Ue Coffee. You’ll find the counter at the back, on the right, with the enclosed kitchen to the left. There are retail shelves on the right-hand wall, next to the roastery doors, while to left, against the wall of the kitchen, is a small selection of local produce (mostly eggs and honey).

Directly ahead of you, as you enter, are a pair of armchairs, located midway along the right-hand wall, while to the left of them is a high, six-person table in front of the right-hand end of the counter. This is followed by a one-person table against a pillar, with the remaining seating along the front of the café, where a long bench runs from the doors all the way along under the windows. From right-to-left, starting next to the door, are a pair of large, four-person tables, followed by two smaller, two-person ones. The bench continues along the exposed brick of the left-hand wall, with another two-person table, then a four-person one. Finally, the bench extends along wood-clad back wall, running along the front of the kitchen where there’s one last four-person table.

When it comes to coffee, the ever-present house-blend is on espresso, joined by a monthly guest coffee, plus a tea of the month for those that are so inclined. Normally I’d have been all over the breakfast/brunch/lunch menu, but we’d eaten at The Old Smithy, so I settled for the toasted banana bread, while Amanda had a slice of the chocolate orange caramel shortbread.

Having had espresso-based drinks at The Old Smithy, we both went for pour-overs, with the choice of any of the roastery’s blends and single-origins. Amanda selected the El Salvador (which was the guest coffee, the same one that I’d had at The Old Smithy), while I had the Finca Liquidambar, a washed coffee from Honduras.

Of the two, the El Salvador was the darker (although it was still a light roast) but that’s about the only difference I could tell. While I marginally preferred mine, both were very good. Amanda could taste summer fruits in the El Salvador, while she got tropical citrus from the Honduras. The caramel shortbread, by the way, was lovely, with a subtle orange flavour which Amanda said paired well with the El Salvador. The banana bread, meanwhile, was excellent: a single, thick slice with a subtle banana flavour. On its own, it was really tasty, but it was even better covered in the Greek yoghurt and honey that came with it!