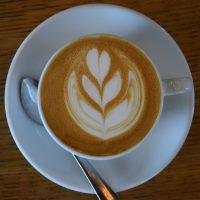 I first came to Portland, Maine in 2015 to start my journey across the USA, travelling by train from Portland (Maine) to Portland (Oregon). Before I set off, I spent a day exploring the city, finding a small, vibrant speciality coffee scene. This included Tandem Coffee Roasters with its bakery on Congress Street and the eponymous coffee shop/roastery on Anderson Street, part of an up-and-coming area north of the city centre.

It was four years before I returned to Portland, flying out last summer to visit Amanda. Naturally I took the opportunity to catch up with Tandem, Amanda and I calling in for coffee (I also popped back to the roastery the following Friday to attend a public cupping). Much of what I found was very familiar, in particular the intimate coffee bar. However, plenty had changed, including the roastery, which had relocated to the building next door.

Since I’m back in Portland (visiting Amanda, naturally) I thought I’d mark the occasion with this Coffee Spot Update, covering both the coffee shop and the roastery.

You can see what’s changed (and what’s stayed the same) after the gallery.

Driving up to Tandem for the first time after four years, everything felt very familiar, from the low, brick-built L-shaped building to the Tandem sculpture and picnic tables outside, although the neighbourhood had definitely undergone a massive change since I was last there. In 2015, even getting to Tandem was a bit of a trial since the roads were all being dug up and surfaced. I had to walk through a construction site just to get there, while Anderson Street itself was nothing more a dirt road. Back then the only real reason to visit that part of town was Tandem, an area I described as “up-and-coming”, although I did say that I was “sure it’ll be very fine when it’s finished”.

Well, I’m pleased to say that it’s been finished for some time and is, as I suspected it would be, very fine. Even the roads are paved! From the outside, nothing much has changed, with Tandem still occupying the same building. Instead, the first difference comes as you step inside. Back in 2015, you were greeted by the roastery, all bags of green beans and boxes of freshly-roasted coffee, surrounding a 12kg Probat roaster. This was directly ahead of you, while to your right was a small entrance lobby with a single narrow bar and solitary bar stool.

These days, the roastery has gone, relocated to a second single-story brick building behind the first. The Probat has also moved on, replaced by a 15kg Loring, which was on order during my visit in 2015. This, in turn, has also been replaced, this time by a 35kg Loring, which took its place when the roastery moved buildings.

Instead of the crowded roastery, Tandem now has a large, open laboratory/training room (where the weekly cuppings are held each Friday). The only hold-over from the roastery days is the small San Franciscan sample roaster which occupies exactly the same spot on the counter as it did when I first visited in 2015! The other change is the entrance lobby, which is completely gone, along with the small room behind it. In its place is a cosy seating area with an L-shaped bench, complete with padded back, lined with three round tables.

There are fewer changes off to the left, where Tandem still has its lovely coffee bar, which, continuing the L-theme, has an L-shaped counter, the seating around the edges. The main changes here are the retail shelves, which are far more extensive than they were in 2015, and the menu. In 2015, Tandem served a concise espresso menu, with either the house-blend or a guest, plus two-single origins on V60 and cold-brew on tap in the summer. There was also a choice of two teas (one black, one green) and a small selection of cakes.

These days, there’s a slightly expanded (but still concise) espresso menu, while a batch brew option has joined the two single-origins on pour-over. As well as the cakes, Tandem now offers a pair of breakfast sandwiches, while if you want your coffee to go, there’s a very commendable $0.25 charge unless you bring your own cup. This is a policy which I thoroughly support, but what I hadn’t realised, until I saw this article in Huffington Post, was just how successful it’s been!

On my return, Amanda and I both went for espresso-based drinks, Amanda opting for a cappuccino with the Time and Temperature house blend (which she declared to be very fine), while I repeated my experiences from my first visit in 2015, deciding on the guest. This was the La Folie, a washed coffee from Antigua in Guatemala, a rich, complex coffee which I had as an espresso, a fitting drink to mark my return to Tandem.

There’s a full write-up of both Tandem Coffee Roasters and the Tandem Cafe & Roastery, each of which includes a complete gallery. You can also see what I made of them in my original write-ups from June 2015 (click here for the roastery and here for the coffee shop).

December 2020: Tandem Coffee was a runner-up for the 2020 Best Roaster/Retailer Award.