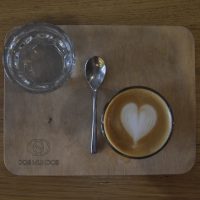 Monday’s Coffee Spot takes us back to last summer in Prague, when I found so many great coffee shops that I’m still writing about them! Today is the turn of Dos Mondus, another well-established player, which has had a coffee shop/roastery in Vinohrady, east of the centre, since 2013, with a second café opening across the river in Holešovice in 2017.

Typically, I visit places in reverse order, but this time I got it the right way around, trying the original coffee shop/roastery on Korunní first. Occupying a pair of adjoining rooms, the seating is all on the right, while the left-hand side holds both the counter and the roastery, with the roaster, a lovely-looking 6kg Giesen, taking pride of place in the window.

All the coffee is roasted on-site on Mondays and Thursdays, with two options on espresso and one on batch brew. The specific options change daily, drawn from a seasonal selection of up to 10 single-origins from around the world (Dos Mundos had seven single-origins on offer during my visit), all of which are available through V60, Aeropress or Chemex. Naturally, all the beans are available to buy as well, along with a selection of coffee-making kit.

Dos Mundos is on the northern side of Korunní, near the top of the hill to the east of the Church of Saint Ludmila. It’s a fairly small space, with an ornate white façade. There’s a single window to the left, with the door to the right, both openings surmounted by arches. The empty wall space along the front is occupied by two large menu boards, written in chalk. Inside, Dos Mundos occupies a pair of rooms, the party wall having been knocked through and replaced by a broad, low arch. The counter runs under the arch, separating the two spaces.

The door leads you into the right-hand room, the coffee shop side, which is dominated by a large, six-person communal table in the centre, seating provided by high, square-topped stools. This is directly ahead of you as you enter, while to your right is a short, two-person bar. Alternatively, there are two round stools on the left by the counter. Finally, in the back right-hand corner, a small, round table has four low stools.

The remaining space is occupied by retail shelves. There are a pair of standalone equipment shelves against the front wall to the left of the door, while right at the back, just by the counter on the back wall, are three more shelves with bags of coffee for sale. Finally, three shelves run high up on the right-hand wall, lined with pour-over equipment.

The second room has the roastery at the front, with the Giesen taking pride of place in the window. The remaining two-thirds of the space belongs to the counter, a large, uncluttered affair with till at the front and espresso machine at the far end, the beans of the day written up on a small sign in front of it. A more extensive menu, which includes all the current single-origins, is chalked up on a blackboard which runs the full width of the wall behind the counter. Finally, the pour-over station is on the workspace under the menus.

Dos Mundos, which is Spanish for “two worlds”, gains its name from the two worlds of coffee, the world of coffee farms (green beans), and the world of roasters/coffee shops (brown beans). The owners chose to name it in Spanish because that’s the language spoken in many coffee-growing countries.

Dos Mondus specialises in lighter roasts and has a range of coffee from around the world. It’s the ideal place to come if you want to try a variety of coffees: you could come every day of the week and have a different one! It’s also idea if you want to watch the roaster at work, although sadly for me, I visited on a Friday afternoon.

During my visit Dos Mundos had three African coffees, three Central American coffees and one from South America. The concise espresso-based menu has two daily options: mine were a Kenya Karagoto (which was also on batch brew) and a Honduran San Rafael. Although tempted to try the Kenya both ways, it was the end of a long day and I was already over-caffeinated, so I took the Honduran in a flat white, which was lovely, very different from the typical sweet, chocolatey flat whites that I’m used to, although I couldn’t put my finger on the precise difference.