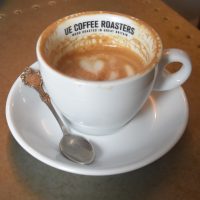 Today’s Coffee Spot, Ue Coffee Roasters at The Old Smithy, is on Market Square, at the southern end of the High Street. The Old Smithy is in a small block of buildings at the Square’s northern end, facing west onto the main street. Initially, it doesn’t look like much, just a single window at the front to the left of the door, underneath which a solitary bench provides the only outdoor seating.

Stepping inside, you’re greeted by the counter at the back, and a small expanse of stone-flagged floor. A broad bench is built into the window to your left, while an L-shaped three-person bar starts next to the window and runs down the left-hand wall. This, I was a told, is a new addition for this year, replacing a large set of retail shelves. Behind the counter, a smaller window in the back wall looks out onto the other side of Market Square.

Although it looks small, appearances can be deception, with a flight of stairs to the right of counter leading to the first of two upstairs rooms. Directly above the downstairs room, this too has a small window at the back and a larger one at the front. The open staircase occupies the back, right-hand corner with the seating down either wall: two small, square tables line a bench against the right-hand wall (as seen from the front) with two pairs of armchairs, each with a coffee table between them, against the left-hand wall. The last of these armchairs doesn’t quite fit into the corner, so is at 90° to the others, its back to the window.

Continuing straight along the back wall, a narrow corridor through the party wall leads into the second room, which is above the opticians. This is a similar size, with two small, square tables along a bench against the party wall, while on the other side are three similar tables. Each table (in both rooms) seats two or three people, depending on the configuration.

You order at the counter, and, while you have to collect your coffee/tea/food, the staff call when its ready, which reduces the amount of hanging around by the counter. As much as I dislike counter service, this seems to work quite well.

In comparison to the True Artisan Café & Store (a five-minute walk away), the coffee offering is limited (if you want pour-over, for example, and Ue’s full range of single-origins, head to the True Artisan Café). However, it’s still pretty impressive, with the house-blend and decaf joined by a monthly guest coffee (also from Ue). This was a washed El Salvador single-origin during our visit and I went for that in a flat white, while Amanda had the house-blend so we could compare the two.

The barista said that the El Salvador was the bolder of the two, and so it turned out. Both were smooth, the coffees going well with the milk, but the El Salvador came through more strongly (before I saw the single-origin, I was going to have the house-blend in a piccolo).

We paired these with an onion marmalade sausage roll (Amanda) and a cheese and chive courgette muffin (me), with chilli jam on the side. My muffin was excellent: served warm, it was rich and moist, the chilli jam complimenting it while giving it a little kick, but without being too hot.

December 2020: Ue Coffee Roasters at The Old Smithy has won the 2020 Coffee Spot with the Best Lighting Award.

6 thoughts on “Ue Coffee Roasters at The Old Smithy”