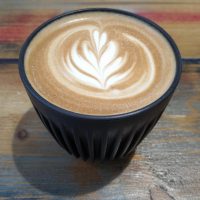 Mini Beans Coffee, a chance Instagram discovery, is located inside Crewe’s Victorian Market Hall. It joins a long, distinguished list of market-based coffee stalls, following in the footsteps of the likes of Pumphreys  Brewing Emporium in Granger Market in Newcastle and Atkinsons in Mackie Mayor just up the M6 in Manchester.

Mini Beans opened in May, a founding tenant of the newly-refurbished Market Hall, which reopened at the same time. Occupying a double unit at the front on the right-hand side, it offers a bespoke house-blend from Limini Coffee on espresso, with a regularly-changing guest roaster on batch brew, plus a small selection of tea. There’s also breakfast (toast, teacakes, porridge and almond croissants), plus afternoon tea and a selection of cakes.

Either order at the counter before taking your drinks to any of the Market Hall’s many tables or order online with the option for collection or table delivery. Note, however, that Mini Beans currently only offers disposable cups, so if you bring your own, don’t forget to order in person at the counter.

Mini Beans Coffee began a mobile horse(coffee)box, which got going just before the COVID-19 pandemic. This severely curtailed activities, so when Mini Beans was offered the chance of a permanent home in Crewe’s Market Hall, the owners, Steve and Maria, jumped at the chance. Although a 20-minute walk north of Crewe Station, I called in during one of my drives back to Guildford.

The Market Hall, built in 1854, has been described (in Nantwich) as Crewe’s answer to Mackie Mayor, which it predates by three years. A handsome, brick-built structure, its short side faces onto Earle Street, where you’ll find three entrances in the original arches, now glazed with glass double doors. The main entrance, in the middle under the clock tower, offers step-free access via a low ramp. There’s a fourth entrance around the corner on Hill Street, which runs down the left-hand side of the Market Hall, while at the back, on Heath Street, are two more entrances.

Inside, the Market Hall is open to the girders supporting the glass-paned roof. The recent refurbishment installed two rows of free-standing units which run down the left- and right-hand sides. Those on the left are more substantial, with one even having an upper level, while those on the right resemble market stalls, with three walls and an open front.

The middle of the hall contains in three long rows of tables running front-to-back. There’s a mix of two, four and six-person tables, some tall with bar chairs, others at normal height, although most are six-person picnic-style tables with benches. At the back is a large stage, which holds events and gigs, with more tables behind that. Finally, to either side of the central door at the front, you’ll find a sofa, armchair and low coffee table, plus a two-person table.

The units on either side are occupied by a range of businesses, including pizza, Mexican, ice cream and beer, with some retail units at the back. Mini Beans Coffee occupies a double unit at the front on the right-hand side, although you can sit where you like, with staff constantly clearing and sanitising the tables.

I’d already eaten at my previous stop in Nantwich (Little Yellow Pig), otherwise I’d have ordered something from one of the other stalls. Instead, I settled for coffee. Although tempted by the filter, a washed coffee from Mexico, roasted by Kickback Coffee, I went for a flat white, made with the house blend (a bespoke mix from Brazil, El Salvador and India), served in my HuskeeCup. The coffee, which is a touch darker than I normally like, went very well with the milk, producing a smooth, rich, flat white, while the milk held the latte art all the way to the bottom of the cup. Then, after a quick chat with the owner, Steve, I was on the road again.