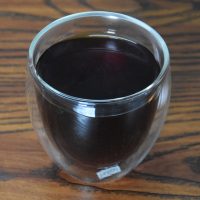 Three weeks ago today, all of my pre-flight checks complete, I was ready for to fly to Atlanta. However, I had one final thing to do before I left for the airport: visit The Roastery at Cobham, home to Copper Coffee Roasters. Despite being located just along the A3 from Guildford, Copper’s was a chance discovery that I only found out about when I visited Nikki’s in Weybridge. In my defence, Copper’s is a relatively new addition to the area, having opened in March 2020, just in time for the COVID-19 pandemic.

Occupying one of several old barns at Bramley Hedge Farm, The Roastery at Cobham is both a roastery (as the name would suggest) and a coffee shop. It’s a little unusual in that it’s only open in the mornings, with Monday being the best day if you want to catch the roaster in action. The offering’s simple, with a single option on espresso (usually one of the blends) and any of the roastery’s many single-origins as a pour-over using the V60. You can also have tea and hot chocolate, while on any day except Monday, there’s a selection of cakes and pastries from McLaren Fine Foods in Weybridge.

Like Thursday’s Coffee Spot, NewGround Coffee Roastery & Coffee Shop, you’re unlikely to stumble upon The Roastery at Cobham by accident, unless you’re visiting the equestrian centre, body shop or either of the two gyms which share Bramley Hedge Farm with the roastery. You’re not even likely to drive past, since just beyond the farm, the road comes to an abrupt dead end to the north of the A3.

Once you’ve found Bramley Hedge Farm, Copper’s is not that obvious, just a small sign to the right of the gate giving its presence away. Head in past the farm buildings, then turn right at the end, where you’ll find The Roastery at Cobham about halfway along a row of single-storey barns on the left (with plenty of parking on the right). Copper’s occupies the rear half of Unit 4, an old livestock barn, with no fewer than three signs at the front to point you in the right direction.

Big double doors on the left mark the start of The Roastery at Cobham, with a generous outdoor seating area against the wall beyond. There are four tables, two picnic-style with benches, along with a couple of large umbrellas for shade/shelter from the rain. Alternatively, head inside, where you’ll find the counter directly in front of you, with the rest of The Roastery at Cobham stretching off to your right.

Looking down the length of The Roastery at Cobham, with the doors to your right and the counter to your left, the space is neatly split into three, starting with the counter area, which is as far as you need to go if you are just ordering takeaway. Next comes a neat seating area (although you can also sit at one of two stools at the counter), which occupies the middle third of The Roastery at Cobham. This consists of a sofa and four two-person tables to the left, with retail shelves and a green bean store to the right. Finally, at the back, is the roastery itself, with a packing area on the left and the 5 kg Toper, which is unusual in that it’s electrically powered, taking pride of place in the middle.

Copper Coffee Roasters is a father and son operation, who had a background in coffee, vending machines and engineering before deciding to set up their own roastery and coffee shop. I met Simon (the father), who was serving behind the counter, and Martin, who confines himself to roasting and the final third of the building. Matt (the son), meanwhile, can also be found in the coffee shop, but has Mondays (when I visited) off.

Monday, by the way, is not the best day to visit, since as well as missing Matt, you also miss the pastries and cakes, but as compensation, it is the best day to see the roaster in action, with Martin typically turning out between 70 and 80 kg of roasted coffee.

When it comes to drinking the coffee, there’s a blend on espresso (it was the Foxtrot Oscar while I was there, a mix of beans from El Salvador, Ethiopia and Guatemala), while you can have any of the roastery’s single-origin output as a pour-over through the V60.

I decided that I would try a pour-over and, in discussion with Simon, settled upon the Rwanda Bwenda, a naturally-processed coffee, which was served in a double-walled glass cup. My coffee was very fine, surprisingly delicate and sweet for a natural, with a more subtle profile. Ideally, I’d have stayed longer, but I had a plane to catch, so was swiftly on my way.

3 thoughts on “The Roastery at Cobham”