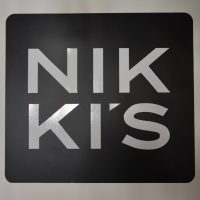 Nikki’s has been flying the flag for speciality coffee in Weybridge for the last seven years and has been on my list for almost as long. Located on the western edge of town, Nikki’s occupies the ground floor of a detached house at the end of Balfour Road. Ironically, it’s about as far from Weybridge Station (which is well to the south of the town) as it is to Addlestone Station, off to the west, both being about 20 minutes’ walk away. You can sit outside on a small terrace in front of Nikki’s or in the cosy interior, which has recently been refurbished.

When it comes to coffee, Nikki’s currently uses a bespoke house blend, roasted by Copper Coffee Roasters in Cobham. This is available via a standard espresso-based menu, while there’s an option to have it as a Chemex. There’s also a wide range of tea, smoothies, juices and milk shakes. If you’re hungry, Nikki’s has separate breakfast and lunch menus, something of a rarity in the days of the all-day brunch. Breakfast features various egg, toast, bun and pancake options, while lunch offers buns, burgers and salads. This is all backed up with a range of Cakesmith cakes.

Nikki’s occupies the ground floor of a detached house on the southern side of the busy A317, just as it reaches Weybridge town centre. The door is on the right, with two well-separated large windows on the left, followed by a separate door providing access to the flats above. A small strip of artificial grass occupies the space between the windows and the pavement, where you’ll find three small, round, two-person tables, low planters separating the seating from the pavement.

Inside, Nikki’s is about three times deep as it is wide. The front half is given over to seating, while the back half is split, with the counter on the left, beyond which is the enclosed kitchen, while there’s more seating on the right. It’s a simple space (in a good way) with a green and white colour scheme (plus plenty of plants) and bare wooden flooring. Like many coffee shops I know, Nikki’s used the enforced closure at the start of the COVID-19 pandemic to refurbish the shop.

The rest of the seating is on the right, starting with a three-person bar which begins at door and runs along the right-hand wall. This is followed by a six-person communal table with what looks like an old pew against the wall, with two chairs on the opposite side and one at either end. The seating continues at the back, where there’s a four-person table opposite the counter and a pair of two-person tables in the back, right-hand corner, opposite the enclosed kitchen.

Nikki’s offers a full table service, with QR Codes on each table which take you to the online menu. You’ll find the breakfast (until noon) and lunch (11:30 to 15:00) menus on one page, with a separate link to the drinks menu. Meanwhile, if you are ordering takeaway, there’s a drinks menu on the back wall, to the right of the counter, next to the door to the kitchen.

I was too late to sample the breakfast menu, instead having the halloumi and avocado bun from the lunch menu, consisting of a lovely brioche bun with generous slices of fried halloumi on a layer of smashed avocado. I paired this with a rich, creamy flat white and then, since it was on the menu, I tried the same coffee, Niiki’s bespoke house blend, as a Chemex, a relatively new addition to the menu. Here the coffee’s roots as an espresso blend came strongly through, with plenty of body and chocolate notes.

Afterwards I chatted with the barista, Troy, who was responsible for creating the house blend in conjunction with the roastery staff at Copper Coffee Roasters. This was designed to be a classic crowd pleaser which goes equally well in milk and on its own (which it does). He would also like to expand the filter/pour-over offering at Nikki’s, although for now he’s happy just getting customers used to the idea.

December 2021: Nikki’s was a runner-up for the 2021 Best Neighbourhood Coffee Spot Award.