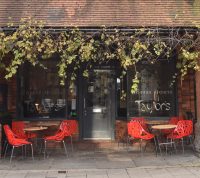 I’m rather embarrassed that I hadn’t heard of Taylor’s Coffee House until I was tipped off by the staff of Nikki’s in Weybridge, particularly since Taylor’s has been around since 2014! Taylor’s has two locations, a kiosk-style coffee counter in Woking Market Walk and the subject of today’s Coffee Spot, which is just outside West Byfleet Station, another place I’ve zipped through many times on the train to/from London without ever getting off.

Taylor’s Coffee House is on Station Approach, part of a row of restaurants and cafés on the right-hand side as you head for the station. It’s a lovely spot, with a sheltered, outdoor seating area and a three-part interior best described as a collection of sitting rooms, replete with numerous armchairs, sofas and cosy corners.

The coffee is from local roasters, Beanberry Coffee, with the Javascript seasonal espresso blend and Mexico Chiapas decaf available through a concise espresso-based menu, along with a selection of teas and infusions from Teapigs. There’s also a small retail section where you can buy coffee beans, tea, non-dairy milks and a range of other goodies. If you’re hungry, Taylor’s has a small selection of cakes, pastries and toasted sandwiches.

Taylor’s Coffee House is just outside West Byfleet Station. Leaving the station on the south side, turn right, then follow the road around until you find Taylor’s on your left, sandwiched between two Italian restaurants. Alternatively, if you’re heading for the station (and following the one-way system), Taylor’s is on the right.

Taylor’s is housed in a lovely, old, brick-built terrace with a wonderfully high, sloping roof which extends beyond the front of the building. Set well back from the (usually quiet) road, this creates a sheltered bay at the front, which Taylor’s has turned into a wonderful outdoor seating area, the overhanging roof providing both shade and respite from the rain. Best of all are the vines which grow along the edge of the roof.

There are four two-/three-person tables arranged in pairs on either side of the central door, which is recessed between two large windows, which make up the front of Taylor’s. As nice as it is out here, you’re missing out if you don’t go inside, where Taylor’s feels like a collection of intimate sitting rooms, with a coffee bar in the middle. The largest of three rooms, which has the bulk of the seating, is at the front, while a broad opening in the back wall leads to a smaller, narrower second room which contains the counter (right) and retail shelves (left). Finally, a couple of steps lead up through a doorway into the narrow back room, which has the last of the seating.

Returning to the front room, this is roughly square, with four groups of chairs, one in each corner. This leaves a clear path from the door straight down the middle to the opening in the back wall and the counter beyond. Shallow bay windows flank the door, each occupied by a couple of chairs, ranging in style from a comfy armchair to an executive-style office chair.

The seating in the back corners is separated from their counterparts at the front by tall bookcases, giving each of the four seating areas a real sense of privacy, as if you were in your own little lounge. Since the opening in the back wall is offset to the right, the left-hand corner is the wider of the two, accommodating a sofa and pair of matching armchairs, facing each other across a pair of coffee tables, while to the right are three armchairs.

Going past the counter and into the back room, you’ll find the last of the seating, tucked away in the back, right-hand corner by the window. A red sofa under a mirror on the back wall faces three more armchairs, all clustered around a glass-topped coffee table.

Returning to middle section, you order at the counter, then take a seat and your coffee will be brought to you. The counter’s a fairly simple affair, with the cakes displayed on top and the La Marzocco Linea espresso machine at an angle on the right, on the wall behind the counter. The menu, meanwhile, is on the back wall, directly ahead you as you order, with retail shelves and a chiller cabinet full of grab-and-go goodies on the opposite wall behind you.

I’d come from lunch and rather a lot of coffee at Nikki’s, so kept it simple with a decaf flat white and the last mozzarella and onion chutney toastie, a wonderfully crunchy concoction that was served on a wooden tray. The flat white, meanwhile, was rich and smooth, the coffee going well with the milk, which was perfectly steamed, holding the latte art to the bottom of the cup.