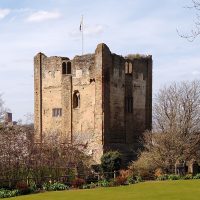 Since I can’t travel anywhere (other than reliving past trips through the Travel Spot) and, with the odd exception, there are no new coffee shops to visit, I thought I’d write about my hometown of Guildford. As I noted last September, despite the COVID-19 pandemic, Guildford’s speciality coffee scene did very well in 2020, this success continuing into 2021 with the opening of Lily London. This is something I’ll highlight in a future post, before I do that, I want to present a short history of speciality coffee in Guildford.

When I moved here in the late 1990s, my coffee choices were limited to the national chains and a handful of independents, but nothing that would count as speciality coffee (not that I knew what it was at the time). Back then, you’d have found me in the Costa Coffee on Swan Lane and, after that, in the Waterstones’ Costa on the High Street. Ironically, both have now closed, Swan Lane a victim of the COVID-19 pandemic, while the Waterstones’ coffee shop went when Waterstones moved across the High Street and into smaller premises. The speciality story only really gets going in 2012, around the time I started the Coffee Spot.

When I started the Coffee Spot in 2012, my favourite Guildford Coffee Spot was Bar des Arts, a cocktail bar which provided the perfect, relaxed location for a day-time coffee. Meanwhile, when it came to coffee at home, I bought most of my beans from Trish’s Coffee Charisma stall on Guildford High Street. And finally, there was Glutton & Glee on Tunsgate, which, while primarily a brunch spot (and an excellent one at that) served a decent espresso-based menu using the ubiquitous Redchurch blend from Allpress.

What I consider to be Guildford’s first dedicated speciality coffee shop arrived in March of the following year, in the shape of the Guerra Coffee pop-up espresso bar on Friary Street, serving Has Bean. Sadly, as is the nature of pop-ups, it was short-lived, but in June that year, Bar des Arts upped its coffee game by bringing in the (relatively) local Horsham Coffee Roaster and rolling out a new, improved coffee menu.

The next improvement came in 2014 when Flying Coffee Bean (these days FCB Coffee), which has a coffee bar in Guildford station, also went down the Horsham Coffee Roaster route, instantly improving the quality of its coffee and giving Guildford a third speciality coffee outlet. However, things rather stalled at that point, and then took a step backwards the following year when Bar des Arts closed in October 2015. Although Glutton & Glee was still going, albeit under new ownership and with a new name (Kalm Kitchen Café), this left Guildford without a sit-down coffee shop dedicated to speciality coffee.

That all changed in 2016, when local roaster, Surrey Hills Coffee, opened its first coffee shop on Chapel Street, taking over the lease from the Turn Fit Deli, which Surrey Hills used to supply. At last, Guildford had a dedicated speciality coffee shop!

After that, things started to slowly improve, with Surrey Hills followed in the summer of 2017 by Canopy Coffee on Haydon Place and, in the following year, by Krema Coffee on Tunsgate, just two doors along from Kalm Kitchen Café. 2018 also saw Surrey Hills move from its cramped premises on Chapel Street to a much larger space, spread over two floors on Jeffries Passage, with a second coffee shop opening at London Square, opposite London Road station.

2019 saw another new opening, this time on the University of Surrey’s Stag Hill campus, where The Hideout turned an old bank branch into a lovely coffee shop (the owners having previously run a coffee cart just around the corner). Unfortunately, it was very much a case of gain one, lose one as in November that year, Kalm Kitchen Café shut its doors for the last time. It was also the end of Charisma Coffee as Trish returned to her native New Zealand.

At the start of 2020, speciality coffee in Guildford was in pretty good shape, with three dedicated coffee shops in the town centre (Surrey Hills, Canopy and Krema), the Hideout at the university and Surrey Hills over in London Square. There were also two local roasters in Surrey Hills Coffee and Chimney Fire Coffee.