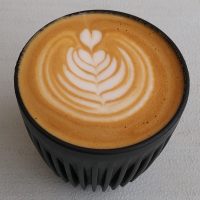 May 2021: Lily London now has a pair of two-person tables which it puts out on the pavement every day if you want to sit to drink your coffee. There are also two more Lily Londons in telephone boxes, one in Eastbourne and the other outside the Shard in London.

July 2021: Lily London now has four two-person tables on the pavement in front of the telephone box, plus there’s a fourth Lily London in Edinburgh.

Lily London opened right at the end of 2020, although it then closed over Christmas and New Year, before reopening on the first weekend on 2021. Although the concept of a speciality coffee shop in a phone box isn’t new (see, for example, Jake’s Coffee Box) they are still quite rare and Lily Coffee is definitely a first for Guildford.

Located at the High Street end of Tunsgate, it operates out of one of the two disused red telephone boxes located behind the Tunsgate Arch. This houses the two-group Fracino espresso machine, a very swish Sanremo grinder and the (bottled) water supply, with the coffee being served from a large table at the front. This all shelters under a large, temporary awning which is erected each day and taken down again at night.

The owner, Lily, started in the coffee business by importing green beans from Brazil, working with companies such as Horsham Coffee Roaster and Plot Roasting. When the time came to set up Lily London, it seemed natural to turn to Plot to roast the coffee, which is imported directly from various farms in Brazil. I suspect the precise coffee on offer will change on a seasonal basis, but for now, it’s a naturally-processed catuai varietal.

I popped down on Tuesday, armed with my trusty HuskeeCup, opting for a flat white, expertly made by my barista. I was also lucky enough to run into Lily, who was there when I visited. The coffee was excellent, going really well with the milk to make a smooth, well-rounded flat white. I also have to say that the milk was perfectly steamed (no mean feat when you are working outdoors), holding the latte art right to bottom of the cup. I had regular milk, but oat milk is also available for those that want it.

While I was chatting with Lily, who was telling me how helpful and supportive Guildford Borough Council had been when it came to getting the phone box up and running, I had a shot of the espresso, which was surprisingly bright, but with a pleasing sweetness.

If I hadn’t already got a cupboard full of beans at home (including an unopened bag of Horsham Coffee’s festive blend and one from Tandem Coffee Roasters which I’m working my way through at the moment) I’d have bought a bag to run through my Sage Barista Express. As it is, you can be sure that I’ll be back for a bag (and plenty of flat whites) in the near future!

You can see what I made of Lily London, Shard. Hopefully I will get to visit the other Lily Londons in due course!