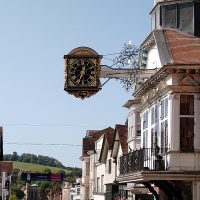 It’s been a busy time, coffee-wise, in my hometown of Guildford, so I thought I would take the unusual step of writing a Coffee Spot Update for the town itself, rather than for each individual coffee shop. Perhaps the most exciting news is that, since the start of September, Guildford has a brand new coffee shop, the Ceylon House of Coffee, which I featured at the start of the week as Monday’s Coffee Spot. However, there have been plenty of other changes, including reopenings, changes of hours and a couple of places opening up their indoor seating. In fact, I think that the only place that hasn’t changed since I was last in town (in August!) is Canopy Coffee.

Despite the COVID-19 pandemic, Guildford’s speciality coffee scene seems to be doing well. Depending on what you count, Guildford now has six specialty coffee shops, with only the Surrey Hills Coffee pod (serving the offices in London Square) unable to reopen at the moment. As with elsewhere in the country, however, circumstances are still challenging and, in light of recent events, the future is even more uncertain than before, so please do support your local coffee shops if you can.

You can find out what’s been going on after the gallery.

I left Guildford at the end of August for some family business in North Wales, returning in mid-September, only to find that (almost) everything had changed. So, perversely, let’s start with the one place that hasn’t changed, Canopy Coffee, where I went for my first coffee on my return. Canopy is doing very well as a takeaway only business at the moment, and, while I haven’t spoken with owner, Jonathon, I suspect that it’s going to stay that way for the foreseeable future. However, according to recent Instagram post, Canopy will be opening its doors again fairly soon, although that’s only so you don’t have to stand outside in the cold, ordering at the hatch!

Another of Guildford’s successful reopenings was Krema Coffee. This too went down the takeaway only route, but has recently reopened its indoor seating, as well as extending its outdoor seating, adding two more tables to the pedestrianised street to go with the two in front of the window. I was there last week, although since we sat outside in the sun, I only had a brief peek inside, where things looked much the same as they did before the pandemic, albeit with slightly fewer tables to increase the spacing. There’s also a system in place where you can leave your contact details.

The third of central Guildford’s original triumvirate of speciality coffee shops, Surrey Hills Coffee on Jeffries Passage, returned as Koja, again initially only offering a takeaway service. However, it too has now added limited indoor seating, with stools at both the window-bar and the bar along the left-hand wall. Unfortunately, during my brief stay at home, I didn’t have time to pop in and say hello.

There are two more reopenings to report, starting with the FCB Coffee kiosk at Guildford station. I’m pretty sure that this has been open for a while, but only in the mornings. However, since I don’t do mornings, the few times I’ve been through the station, it’s been closed by the time I got there. Not yesterday, though, when hurrying to catch my train in the middle of the afternoon, I was surprised to find the kiosk open, which is a welcome sign. Currently it opens at six o’clock each morning, only closing again at five each afternoon.

The final reopening is one I’ve not been able to check on myself, but I’m reliably informed that The Hideout is back on the University of Surrey campus, opening its doors ahead of the return of the students. Since I’ve not been up there, I can’t tell you much, although given how spacious it is, I doubt there will be any problems with social distancing! There’s also a new app which you can use to order ahead, which should help to minimise queuing times.

So that just leaves the newcomer, the Ceylon House of Coffee. Opening a coffee shop in the middle of a pandemic is a very brave move and deserves your support. There’s not much I can add to what I already said about it in Monday’s Coffee Spot, although I did pop in yesterday. I was dropping off a copy on my book, The Philosophy of Coffee, and, while I was there, I learnt that plans to install a roaster in the shop were well advanced, so perhaps that will be something to look forward to when I head home in a couple of weeks’ time!

Until then, thanks for reading and please keep supporting your local coffee shops whenever you can.