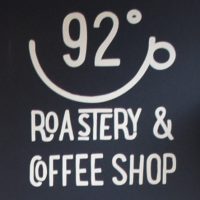 92 Degrees Coffee, Liverpool’s first combined speciality coffee shop/roaster, has come a long way since I first visited at the end of 2015. Then it was just a single shop at the top of Hardman Street, the roaster tucked away in a small space behind the counter. Now it’s a chain of three, adding a larger shop in the Baltic Triangle, which does food, and a smaller shop five minutes’ walk from the original, catering more to the students (and only recently reopened). The roaster has also moved since my original visit, first to the Baltic Triangle, then to a dedicated roastery/office back in the same building on Hardman Street (which, sadly, isn’t open to the public).

This update is about the original which looks and feels very much how I remember it from my visit almost five years ago. There are a few COVID-19 changes, such as a thinning out of the seating and a move to disposable cups (so don’t forget to bring your own). However, the basic offering is the same, with the house blend on espresso and three options through the Kalita Wave, along with tea, hot chocolate, plus a selection of cakes, bagels and prepared sandwiches/salads.

The original 92 Degrees Coffee occupies a spacious, high-ceilinged Art-Deco building dating from 1931, built as part of Liverpool’s School for the Blind, and located at the top of Hardman Street, at the corner with Hope Street. There’s a handful of tables outside on the broad pavement, two to the right of the door and more to the left, separated by long, low wooden planters.

The entrance is like an internal, square porch, with double doors that open onto the street. Inside, a door to the right directs you to the counter, which occupies the right-hand end of 92 Degrees, with an open kitchen and storeroom behind. This is where the original 2.5 kg Diedrich coffee roaster used to live before it moved with the opening of the second coffee shop in the Baltic Triangle.

Standing at the counter, the seating is to the left/behind you, the internal porch effectively splitting 92 Degrees in two, leaving the area in front of the counter delightfully uncluttered. This, in turn, provides an extremely effective way of separating customers queuing to order/waiting for take-away coffee from those sitting in.

The seating is arranged in an L-shape, running along the back wall, down the left-hand wall and along the windows at the front, all the way to the internal porch. It’s been rearranged since my first visit in late 2015, plus it’s been thinned out to comply with social distancing requirements.

The seating starts with a repurposed barrel, which has been fitted with a round top, making a table for six, although you would all have to be part of the same group to sit there. This is against the back wall, opposite the porch, while to its left is one of the two-person sofas that used to sit in the corner, followed by a three-person table, while the corner itself now has a pair of armchairs.

A bench runs along the left-hand wall, now home to the 10-person communal table which used to stand where the barrel now is. Carrying on, the nine-person window-bar still runs along the front of 92 Degrees, while there are two pairs of comfortable chairs, one each against the walls of the porch. Finally, two four-person tables occupy the centre of the space.

The basic coffee offering is similar to what I remember, with a core espresso menu, these days based around the Hope Street blend, 92 Degrees moving more towards blends than single-origins. There are three choices on filter, displayed in glass jars on the counter in front of the Kalita Wave filters (replacing the V60s from my first visit). Two are single-origins, both washed coffees, the Colombian Las Sonadoras and the Honduran Capucas Cooperative. The third choice is California Calling which, unusually for pour-over, is a blend, combining the two single-origins. Interestingly, the two single-origins are also used to make the Hope Street espresso blend.

Intrigued, I had the California Calling, served in a disposable cup, which I treated as a carafe, pouring my coffee into my Global WAKEcup for drinking. The coffee itself was lovely, full-bodied with subtle, fruity flavours. In an ideal world, I’d have compared this to the Hope Street espresso, but sadly I was already over-caffeinated, instead just savouring the atmosphere of 92 Degrees. It was like I’d never been away.

Liked this? Check out the rest of Liverpool’s speciality coffee scene in the Coffee Spot Guide to Liverpool.