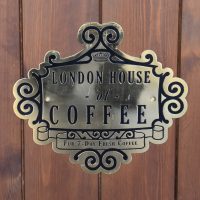 It’s typical. I go away for a couple of weeks and someone opens a coffee shop in Guildford. I think every opening in the last three years has been while I’ve been away… The newcomer in this case is the Ceylon House of Coffee, an offshoot of the London House of Coffee, which, ironically, is in Colombo, Sri Lanka (Ceylon, as was). Meanwhile the Ceylon House of Coffee is in Guildford, occupying the old American Express building at the bottom of the High Street, a lovely, spacious spot with floor-to-ceiling windows, and plenty of well-separated tables and sofas.

What makes the Ceylon House of Coffee stand out from the crowd is that it only serves coffee from Sri Lanka, with the owner attempting to recreate something of Sri Lanka’s heyday as a coffee-producing nation in the mid-19th century. For now, there’s only a single-option on espresso, along with a selection of Sri Lankan tea, plus a wide range of cakes.

The shop, meanwhile, is operating on reduced opening hours while everyone finds their feet, with drinks being served in disposable cups, although the staff are happy to accept customers’ reusable cups, so don’t forget to bring yours along!

February 2021: having been closed since the start of the year, Ceylon House of Coffee reopened (takeaway only) in the middle of February.

May 2021: Ceylon House of Coffee has now reopened its indoor seating, following the relaxation of the COVID-19 restrictions in England.

The Ceylon House of Coffee has been a long time coming, planning having started midway through 2019, with a tentative opening date at the start of this year. However, problems with builders pushed things back, then along came COVID-19… However, the Ceylon House of Coffee finally opened its doors in September, and while not yet the finished article, it’s well worth a visit.

Occupying the old American Express building at the bottom of the High Street, it’s on your right as you head up the hill from the river (coincidentally, at the end of the last millennium, I worked in an office on the floor above; how I’d have loved having the coffee shop around back then!). A lovely, old building, its beauty is enhanced by the Ceylon House of Coffee with its elegant, dark wood interior. The aim, by the way, is to recreate the atmosphere of an old-fashioned Sri Lankan coffee house, albeit with modern touches, such as electric lights and an espresso machine!

The central door is flanked by two floor-to-ceiling windows running the width of the building. Inside, it’s split into two, with a step up to the left-hand section, mirroring the rise of the hill outside. The right-hand side contains the counter, a magnificent affair which greets you from the back of the room, while the bulk of the seat is off to the left, the numbers of tables inevitably reduced to meet COVID-19 restrictions.

Indeed, several of the chairs are pressed into use to form temporary barriers at the door, which lead you towards the counter, where you order before taking a seat, your drinks being brought out to you. For now, there’s just a cluster of armchairs in the window to the right (under where my desk used to be) and a solitary two-person table against the wall. Meanwhile, to the left, pride of place goes to a pair of armchairs and a sofa against the back wall, while a handful of well-spaced tables occupy the remaining space.

The Ceylon House of Coffee’s parent, the London House of Coffee, was founded by George Martin Kodithuwakku, who researched Sri Lanka’s coffee history, deciding to recreate the coffee from the island’s heyday before leaf rust destroyed its coffee plantations over a ten-year period starting in 1869, prompting the shift to tea. Coffee wasn’t totally wiped out though, and Mr Kodithuwakku found descendants of those old coffee trees, recreating the original varietals which are now grown in a plantation in the Kothmale Hills and roasted on the island, before being airfreighted to the UK, although there are plans to install a roaster in Guildford.

For now, the coffee is only available as espresso, although there is a cafetiere option coming soon. For my first taste of Sri Lankan coffee, I began with a flat white in my HuskeeCup, the beautifully steamed milk holding its pattern to the bottom of the cup. The flavour of the coffee, which is roasted a shade or two darker than I would ideally like, came strongly through the milk, making for a very pleasant drink.

I followed this up with an espresso in my Kaffeeform cup, where I could really taste the coffee, which had a deep, well-rounded, rich flavour, with just a touch of bitterness. It’s more old school than I drink these days, but made for a nice change. I also obtained a sample of beans to take home, which I’ve been enjoying as my daily espresso and through my cafetiere in the mornings, although here I can really taste the roast over the flavour of the coffee.

December 2020: Ceylon House of Coffee was a runner-up for the 2020 Most Popular Coffee Spot Award.