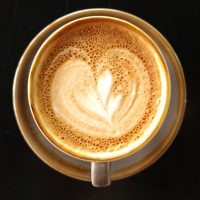 It takes a special business to open in the middle of a global pandemic, which is exactly what The Collective, in Caversham, did. In fairness, the plan had been to open a lot earlier, but in a story I hear all too often, there were problems with the fit out and then, just as The Collective was due to open in March, along came the COVID-19 shutdown.

Many would have given up at that point, but not Caversham residents, Sam and Susie, the driving force behind The Collective. Instead they pushed on, The Collective opening in June, initially for takeaway only, before fully opening for table service in mid-September. There’s a brunch menu, which is joined at 11 o’clock by the lunch and toastie menus, all the food cooked in the open kitchen behind the counter. This is backed up by a concise espresso-based menu featuring Extract Coffee Roasters’ Rocket espresso.

However, The Collective’s a lot more than just a café. It’s also a lifestyle store, which reminded me of the likes of Liverpool’s Thoughtfully Café, plus a grocer, selling milk, bread, eggs and more, which brought the likes of Bristol’s No 12 Easton and Elemental Collective to mind.

The Collective is in Caversham, just over the Thames from the centre of Reading.  Located on the corner where St Anne’s Road meets the busy Church Road, it’s a stone’s throw from The Gardens of Caversham in one direction and the Caversham Court riverside park in the other. Occupying a simple, rectangular space on the ground floor of what looks like a converted house, you’ll find the door on the corner, refusing to show any favouritism by standing at 45° degrees to both roads.

There are two large windows at the front, matched by two more along the left-hand side. If you can stand the traffic, there are a couple of benches under the windows at the front, each with a round table and a pair of chairs. Alternatively, there’s a two-person table around the corner on the quieter St Anne’s Road.

Heading inside, The Collective is maybe half as deep again as it is wide, with the front two-thirds occupied by the seating, while the back third is taken up by the large counter. You’ll find the obligatory QR Code for the NHS COVID-19 App just inside the door, but just be aware that it’s behind the door as you open it, so it’s easy to miss. There’s no queueing system, just take a seat at any vacant table and someone will come to take your order. Alternatively, if you’re looking for takeaway or provisions, there’s a limit of three customers at any one time. If there are more, or there’s no free table, just wait at the door.

The layout is simple, starting with a low window-bar in the windows at the front. The centre is occupied by two four-person tables, a large rectangular one at the front and a smaller, round one at the back. Finally, a padded bench runs down the right-hand wall, its four two-person tables separated by head-high, clear plastic pop-up screens like those I saw at Anonymous Coffee Co.

A long set of tall shelves sits in the windows on the left, holding various lifestyle products, at the end of which is a small corner unit with various provisions, including eggs and freshly baked bread. Then comes the counter, running almost the full width of the back of the store, starting with the kitchen on the left. Next is the till, where you can pay before leaving, with the cakes and coffee side of the operation on the right.

A chiller cabinet with milk and soft drinks is across from the counter against the right-hand wall, with the small gap between them leading to a passageway. For now this only gives access to the toilets, but, in due course, it should lead to an outdoor seating area in the garden at the back.

I visited twice, first in July when I popped in for a flat white to go in my JOCO Cup, having been tipped off about The Collective by the manager at Coffee Under Pressure. I returned at the start of October, when I came for lunch, timing things just right for once. I had the pick of the impressive brunch menu, which is served until 2pm, and the lunch and toastie menus, which run from 11am to 3pm.

Spoilt for choice, I finally settled for the Brioche French Toast, being rewarded with a large plate stacked with triangles of light, fluffy French Toast, which avoided the mistake of being overly sweet, topped with copious quantities of raspberries and blueberries. I paired this another flat white, the Rocket espresso going extremely well in milk, just as it had back in July.

3 thoughts on “The Collective”