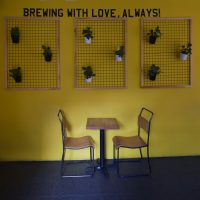 I first visited Reading’s Coffee Under Pressure just over four years ago. Back then, it had only been open for a year, enjoying its status as the new kid on the block. It’s since gone on to open a second location on nearby Blagrave Street, while a third Coffee Under Pressure opened just last month on Park Street in Bristol, a brave move if ever there was one.

The original Coffee Under Pressure, St Mary’s Butts, looks much as I remember it, tucked away in a lovely spot behind the Reading Minster, its sun-drenched, south-facing aspect providing a sheltered spot for its outdoor seating, while you’ll still get a warm welcome inside, the interior seating have recently been reopened following the relaxation of COVID-19 restrictions.

As well as the warm welcome, you’ll find close to Coffee Under Pressure’s full menu with two blends on espresso, plus decaf, as well as several single-origins available as through the V60, all from Winchester’s The Roasting Party. There’s also a wide selection of sweet and savoury items provided from the small kitchen to the left of the counter. The main concession to COVID-19 is that everything’s served to go, even if you’re sitting in.

You notice the first change as you approach Coffee Under Pressure. There always was outside seating on the broad, sheltered area in front of the windows, but this now more spaced out, with the tables arranged in sets of four/five, two at either end of the windows, a third set forward of the door on the right and the fourth even further forward against a wall on the left.

The impact is even more apparent when you step into the small entrance area on the left, which used to house multiple tables. Now it has a solitary two-person table opposite the door, the remaining seating to your right in the larger space that houses the counter, in its usual place at the back. A second solitary two-person table stands at the near end of the floor-to-ceiling windows at the front, with a four-person picnic table with benches at the far end. Finally, the four-person bar against right-hand wall, while still there, has been reduced to three seats.

A sign on the floor greets you as you enter, requesting a two metre separation in the queue, but I was politely asked to wait outside while a couple, who had entered just before me, completed their order and returned outside to occupy one of the tables. You are also asked to wear a mask when inside, either when ordering or moving around, although you’re welcome to remove it when sitting down.

Talking of masks, all three members of staff were masked, covering both nose and mouth and worn at all times. This contrasts with some other shops that I’ve visited where staff removed their masks when not serving customers. The tables were cleaned between customers (which, in fairness, is standard practice in all the other shops I’ve visited). Finally, any customer sitting in (either inside or outside) is asked for their name and phone number, all of which contributed to my feeling very safe.

With the formalities out of the way, I got down to ordering. Since I know The Roasting Party and its coffee really well, I decided to branch out and try the Greek coffee (an addition to the menu since I last visited), which I paired with a slice of spinach and feta pie for lunch. This was served warm in a paper bag and had wonderfully crisp, flaky filo pastry.

My coffee came in a takeaway cup with a paper cup of water on the side, which I appreciated. The coffee comes from Greece (rather than The Roasting Party) and is quite strong, with more than a hint of Robusta. I decanted it  into my Therma Cup, being careful to leave a small amount behind, which had the consistency of sludge (I’ve learnt the hard way from previous Greek coffees never to take the last couple of mouthfuls).

Since I had deliberately chosen something different, this is not a reflection on Coffee Under Pressure, but I think that this confirms that Greek coffee is not to my tastes. Not that the coffee was bad; in fact, given that it had a Robusta component, I was surprised at its relative lack of bitterness and drank the whole cup. Well, all bar the last mouthful, since even with the decanting, there was still a small amount of sludge in the bottom of my Therma Cup!