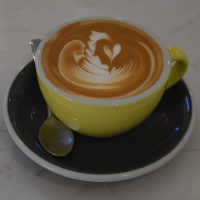 COVID-19 has turned the world as we know it upside down. For speciality coffee, along with many others in the hospitality industry in the UK, it meant the near overnight closure of cafés and coffee shops. However, these started to return in May and June, initially for takeaway service, before the relaxation of restrictions (in England) on July 4th allowed sit-in service to resume.

Initially I was sceptical, worrying that the (entirely necessary) precautions required to keep everyone safe during the COVID-19 pandemic might ruin my coffee shop experience. However, after my early forays to London to visit coffee shops in July, I realised that my fears were unfounded, as I rediscovered the simple joy of sitting in a coffee shop. Since then, I’ve expanded my horizons: as well as several return trips to London, I’ve visited Reading and Chester, two contrasting places, each with their own ways of coping with COVID-19.

I should add a caveat: I time my trips for weekdays, completely avoiding the weekends, visiting around lunchtime and early afternoon, so I can’t comment on how busy places are outside these times. That said, many coffee shops open between 10:00 and 16:00, which tells you something!

When I first went up to London in mid-July, I really didn’t know what to expect. I was surprised at how quiet both the city and the trains were, finding just a handful of coffee shops open, calling in on Notes, Trafalgar Square; Kafi and Attendant, each offering very different experiences. On subsequent visits, I’ve discovered that London is a patchwork; some parts are very quiet indeed, while others are relatively busy.

For example, I walked through the Inns of Court, Holborn and Bloomsbury in early August and it was so quiet. I’d last walked around the area north of the Royal Courts of Justice on a Bank Holiday Monday last year and this was even quieter, with practically everything shut. In contrast, last week I went to areas around Victoria Station and Sloan Square, which were positively buzzing, coffee shops such as Party on Pavilion, Iris & June and Coffee Addict all doing a brisk trade.

My early travels also took me to G!RO Cycles in Esher and The Press Room in Surbiton, where I found that both towns much busier than central London. The same was also true of Reading, which I visited at the end of July on a day trip from Guildford. It was nowhere near as busy as pre-COVID times, but was on a par with Surbiton (and busier than Guildford on a gloomy Tuesday afternoon).

Reading has a relatively small, but well-established homegrown coffee scene, with the pioneering Workhouse Coffee and its flagship location on King Street in the town centre. Sadly this is currently only offering takeaway due to issues with the landlord, but I was able to visit The Gardens of Caversham, Workhouse’s latest venture and the first new (to me, at least) coffee shop that I’d visited since March.

While I was over in Caversham, I also paid a flying visit to the newly-opened Caversham Collective, a cafe, lifestyle store and grocer which opened in the middle of the pandemic. It’s currently only serving takeaway, but is looking to open its indoor seating in September, so I’m hoping to go back then..

Back in the town centre, I called in on a couple of old favourites, handily located on either side of Reading Minster: Coffee Under Pressure and Tamp Culture, both of whom were making very good use of their outside seating areas.

Although it’s difficult to draw conclusions from four very different coffee shops, one thing they all had in common was the use of disposables, serving coffee in disposable cups and, in the case of The Gardens of Caversham and Coffee Under Pressure, serving food on disposable plates (Tamp Culture doesn’t serve food and I was only at the Caversham Collective for coffee). That said, both the Caversham Collective and the Gardens of Caversham were happy to take my reusable cups.

So how did Reading compare to Chester, the other place that I’ve recently visited? you can found out after the gallery.

Chester is the furthest I’ve been from my home in Guildford since the start of the pandemic, when I flew back from America. I visited Chester twice in the space of a few days, once on a day trip from my Dad’s in North Wales (where I was attending to some urgent family business) and again when I stopped off on return my journey home.

The city centre was very busy, probably about as busy as a normal summer’s day and easily the busiest place I’ve been since returning from Chicago. Talking to the coffee shops I visited (six in all, spread across the two days), everyone was busy, particularly those doing food, who were all participating in the Government’s Eat Out to Help Out scheme. For example, Panna Coffee reported that Monday through Wednesday was now like an extended weekend, while The Flower Cup has been consistently busy since it reopened.

The same is true in Hoole, just across the railway tracks from the city centre. I was there on a Monday and both places I visited, Short + Stout and Little Yellow Pig, were very busy at lunchtime. However, I did note that all six coffee shops were operating on reduced hours, so things are not back to normal.

In contrast to Reading, everyone offering sit-in service was using proper cups, plates and cutlery. There was also competitive pressure within the city centre to offer sit-in service. Bean & Cole, which had initially reopened for takeaway service, found there was a distinct drop-off in custom once other coffee shops opened their seating areas, which Bean & Cole countered by opening its own seating area in early July. Moss Coffee, in contrast, is a small, one-man operation just outside the centre, which is doing just fine by only offering takeaway.

In conclusion, I’ve been surprised by how much my experiences have varied across the country. Of all the towns and cities I’ve visited, Chester is by far the one that feels most like its pre-COVID self, with almost all of its speciality coffee shops open and offering a full service. Although I didn’t have time to go in, Chalk Coffee, Jaunty Goat, The Barista’s and Bridge St Coffee were all open and seemed busy, with only Obscure Coffee not having reopened.

Of course, I’ve still only visited a fraction of the coffee shops that have reopened around the country, but I hope to be adding more as time goes on, so keep your eyes open for more COVID-19 updates!

6 thoughts on “Visiting Coffee Shops During COVID-19: Reading and Chester”