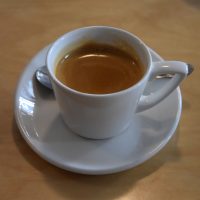 I first came across Panna in Liverpool at the end of 2015, catching up with owners Ivana and Peter once again at the end of last year after they’d successfully relocated Panna to Chester’s Watergate Street. They had done a good job of establishing Panna in the city’s booming speciality coffee scene when along came COVID-19. I was therefore delighted to see that Panna had reopened after the relaxing of the COVID-19 restrictions.

Naturally, there have been changes to keep everyone safe during the pandemic, the most obvious of which can be seen outside on Watergate Street. The street has been pedestrianised, and, as a result, Panna, along with some of the neighbouring business, has an expanded outside seating area. There are more changes inside, such as the inevitable thinning out of the seating, but perhaps the best news is what hasn’t changed, with Panna still offering its full range of coffee and its innovative all-day brunch menu, backed up by a range of cakes and pastries. And, of course, there’s Panna’s famous warm welcome.

Panna used to have a fairly small outdoor seating area, with three two-person tables tucked up on the pavement under the front window. However, with the pedestrianisation of Watergate Street, Panna has moved into an expanded outdoor seating on the street itself, leaving the pavement clear. You’ll find four well-spaced two-person tables, all within a clearly delineated area, its boundaries marked by waist-high wooden planters (which used to flank Panna’s door), separated by wooden panels.

The door is still on the left, and you’ll need to go inside to order, although the staff will bring your drinks and food out to you when they’re ready. Inside, there are more changes, starting with the counter, which is set back on the right-hand side. Rather than go the Perspex screen route (one consistent thing that I’ve heard from coffee shop owners is that Perspex screens are hard to come by, with long lead-times), Panna has used some of its spare tables and benches to pad out the front of the counter, thus keeping customers the requisite two metres away from the masked staff. There’s also a new grab-and-go fridge on the right with sandwiches and cold drinks.

The other obvious change is the seating. The window-bar is still there, although I’m not sure it’s still in use, while the short row of tables down the centre has gone. On the left-hand wall, opposite the counter, the tables have been thinned out, down from seven to four, each cleverly separated from its neighbour by a tall plant. While not providing an impermeable physical barrier, it ensures the necessary separation, while adding a touch of greenery to the interior. Frankly, I’ll be sad to see them go.

There’s more seating at the back, although this too has been reduced, with a four-person and a two-person table on the left, plus a pair of two-person tables tucked away around the corner on the right. Sadly, the outdoor courtyard at the back is off-limits for now.

When I visited last year, Panna had two Has Bean blends  on espresso (Jailbreak and Jabberwocky), but this time around, Jailbreak has been replaced by a bespoke house-blend, a mix of two Brazilian single-origins, along with a range of single-origins (again from Has Bean) on filter through AeroPress, Chemex and V60. Best of all, Panna’s innovative all-day brunch menu is still available, including classics such as bacon sandwiches and waffles along with some less common dishes like the Mexican brunch (chorizo, chicken, peppers and four eggs!).

Sadly I’d just eaten at The Flower Cup, so I settled for an espresso, made wwith the house blend, a lovely, well-balanced shot with plenty of classic notes and pleasing a touch of acidity. This was served in the same white cups that I remember from Panna’s Liverpool days, although if you have a larger drink, it will come in a HuskeeCup, which is a neat touch.

Like everywhere else I’ve visited in Chester, Panna has been very busy since reopening (I snuck in on a quiet Friday afternoon). It’s currently participating in the Government’s Eat Out to Help Out which runs to the end of August. As a result, I was told that Monday, Tuesday and Wednesday were particularly busy, more akin to a three-day Bank Holiday weekend than the start of the week!