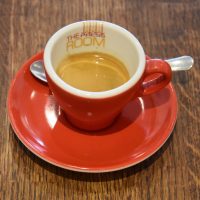 The Press Room is on the busy Claremont Road, directly opposite Surbiton Station. It reopened for takeaway service at the start of May, something for which it is perfectly suited. The front of The Press Room has a door at the right-hand end, while the remainder is occupied by a multi-paned, half-height window that, in warm weather, is fully opened to the left, something I commented on during my first visit in 2013.

In pre-COVID-19 times, the space left by the window would be occupied by bar-seating, letting customers look out on the busy road. For now, the seating is gone, repurposed as a takeout counter, allowing The Press Room to quickly reopen in May. You queue from the left, while a member of staff takes your order, which is prepared at the counter inside and brought out to you.

This service is still in operation, although now you also have the option to sit in, with the member of staff at the window doubling as door warden. A piece of rope politely strung across the door stops you from walking in by accident, allowing the door warden to check if there’s a table free.

If there is, you’re let in, where you’ll find a table opposite the door. This contains one of several hand sanitiser dispensers, as well as a QR code which you can scan on your phone. This takes you to a webpage where you can enter your details (although this can also be done manually, while if you have The Press Room’s loyalty app, you can just check in). Once the admin is out of the way, you can order and pay before going to your table, or you can come back once you’ve had a chance to think. It’s easily the best system I’ve seen so far.

The Press Room has undergone something of a facelift since I was last there, with the owner, David, making full use of the enforced closure during April. However, the basic layout is the same, with the counter set back from the window on the left, seating opposite it on the right, with more in the back half of the shop, although, as I’ve mentioned, the window seating has gone. The tables are more spaced out than before, David telling me that capacity has shrunk from over 50 to just 22, which falls to 10 if everyone is on their own. All of this explains the polite notices on each table asking you to limit your stay to no more than 45 minutes.

The seating starts with three four-person tables with fixed stools opposite the counter, the first of which has been repurposed as the check-in station (which I described above). Beyond this, a long, padded bench-seat runs along right-hand wall with just three well-spaced two-person tables. Opposite them, beyond the counter, is a tall, thin table running front-to-back and, to the left of that, a four-person bar runs along the left-hand wall. Right at the back, a six-person table occupies the back wall on the right, the toilet opposite this on the left.

Unlike other coffee shops I’ve visited post COVID-19, the counter doesn’t have Perspex screens. These are on order, but in the meantime, to give the staff working at the far end some extra protection, the front halves of both the long table and the bar to its left are out of action, replaced by a hand-sanitiser station.

It turns out that I am a creature of habit. On my very first visit in 2013, I had a cortado, which I repeated on my return. Served in a glass, it was excellent, rich and smooth, milk and coffee in perfect harmony. I paired this with an equally excellent pastéis de nata, the rich, creamy custard encased in some very flaky pastry. I rounded things off with a shot of Origin’s Resolute blend as an espresso, a true classic.

December 2020: The Press Room, Surbiton was a runner-up for the 2020 Brian’s Coffee Spot Special Award.