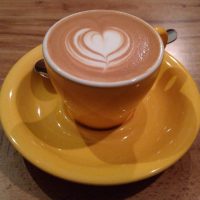 My only disappointment from my visit to Chester at the start of August was the discovery that Obscure Coffee had yet to reopen after the enforced COVID-19 shutdown. Fortunately, I was tipped off a few weeks later by Glenn Mango on Instagram that Obscure was back, so I made sure to pop in when passing through Chester on my way home last week.

Obscure had only been open for two weeks at that point. While the basic set-up is the same, there have been plenty of changes since my first visit a year ago, some of which pre-date COVID-19. The seating has been upgraded in the front section, while Obscure no longer serves pour-overs, instead concentrating on its concise espresso menu, backed up by batch brew through the Moccamaster. The coffee is still from Climpson and Sons, while the warm, friendly welcome is as warm and friendly as ever.

From the street, Obscure Coffee looks like very little has changed, with the four low stools still outside on the pavement. However, a closer look through the windows reveals that all is not how it once was, something which is readily apparent as soon as you step inside.

The small, square front room still has the same basic layout, with the counter at the back on the left, the seating between it and the window. Meanwhile, the right-hand side is left clear, allowing unhindered passage from the door all the way to the even smaller room at the back.

The seating, however, has undergone a major upgrade. The four-person window-bar at the front, and the single, low coffee table at the back, have been replaced by an L-shaped arrangement of four tables which run along padded benches down left-hand wall and along the window at the front. Nick, who along with partner Maz, owns Obscure Coffee told me that the changes, which pre-date COVID-19, have significantly increased the seating capacity, with the added bonus that the bench seat doubles as much-needed storage space.

There are fewer changes in the small back room, where the seating remains essentially unchanged, the main additions being a mat under the pair of armchairs against the front wall and two pictures which now hang on the back wall, above the row of four tightly-packed tables. There’s also a new picture in the front, with Natalie Wood joining Audrey Hepburn, Sophia Loren Bacal and Liz Taylor, who are now all in a group on the left-hand wall.

Chatting with Nick, I asked why he hadn’t reopened earlier. Like many coffee shop owners I’d spoken to, he’d take the time provided by the enforced shutdown to reassess Obscure, while in the later stages, he and Maz travelled around the UK, making the most of the unexpected time off. Realising that once Obscure was back, there’d be no more holidays, they decided to have an extra few weeks to themselves, which struck me as eminently sensible!

Talking of time off, Obscure now no longer opens on Mondays, so Nick has at least one day of the week to himself, with Obscure also opening later, at 10 o’clock, instead of half past eight. Finally, he’s no longer offering pour-over, with just batch brew to complement the espresso-based menu.

Talking of which, I had a lovely flat white, made with the new Climpson and Sons signature Estate espresso, a washed single-origin Kilenso Mokonisa from the Sidamo region of Ethiopia, which had gone into the hopper the day before. It was lovely, very smooth in milk, with classic chocolate and toffee notes coming strongly through the milk.

Nick then persuaded me to try the batch brew, explaining that he was putting on a fresh brew of a beautiful (his description) Uraga Ethiopian, another washed coffee, this time from the Guji region. Well, how could I refuse? And he was right, it was beautiful, smooth and floral. Definitely worth waiting a month for!

There’s a full write-up of Obscure Coffee, including a complete gallery, in its main entry. You can also see what I made of it in my original write-up, from May 2019.