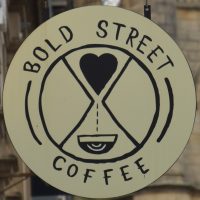 Bold Street Coffee, a legend of Liverpool’s speciality coffee scene, was opened in 2010 by the equally legendary Sam Towil (who, incidentally, now lives in Llangollen, where he runs Sam’s Coffee). I visited in 2013, returning almost exactly seven years later to see how it was faring during the COVID-19 pandemic. In between, Bold Street Coffee has been through a lot, including having to leave its beloved Bold Street home in January 2018, only to return at the end of the year, bigger and better than ever.

Then came 2020 and COVID-19 which forced Bold Street Coffee to close, along with everyone else, in March. Bold Street Coffee partially reopened in May, offering an extremely popular weekend take-out service, before fully reopening in early July, following the relaxation of COVID-19 restrictions in England.

If you’re familiar with Bold Street Coffee of old, the new layout is very similar, only with a larger, open kitchen and more seating at the back. There are also three tables outside on the temporarily-pedestrianised Bold Street. The menus are slightly limited for the moment: there’s no second option on espresso, while filter is restricted to batch-brew, but hopefully things will be back to normal soon.

The first change is related to COVID-19, the council having pedestrianised Bold Street from 10:00 – 18:00, allowing the many restaurants, bars and cafés to put tables outside on the busy street. These are limited to the width of the shop-front, so Bold Street Coffee, which is quite narrow, can only fit three four-person tables outside, but they’re a welcome addition to the bench, which is still there, in front of the window.

Talking of which, the front of Bold Street Coffee is still pretty much all glass, with the large window on the left and door on the right. Inside, it goes a long way back, considerably further than before, the result of a refit, funded by the successful Kickstarter campaign which followed Bold Street Coffee’s departure and subsequent return in 2018.

Originally, Bold Street Coffee occupied maybe two-thirds of the depth of the building, with seating in the first third, the counter in the second third and a very small seating area beyond that. Now it extends to the back of the building, where you’ll find an expanded, open kitchen and more seating, plus tantalisingly, steps leading down to the basement. This, however, is still a work in progress, but hopefully will be open soon.

The front two thirds of Bold Street Coffee haven’t changed that much, with the front third given over to the seating. The long bench against the left-hand wall is still there, lined with two-person tables (usually eight, but reduced to six due to COVID-19), while there is more seating opposite, against the right-and wall. This currently has just two tables, a long, thin, three-person one and a solitary small, square, one-person table.

The middle third remains the domain of the counter, which is still on the left, although it’s undergone something of a makeover since my 2013 visit. Opposite is a large, box-shaped bench along the right-hand wall, above which is a map of the world, showing the coffee-growing regions (both are original features).

The final third is new, the space created by the refit. On the left, following the counter, is the open kitchen, with some counter-style seating along the front, complete with six stools. It’s a bit high for working/eating, but is very good if you’re just drinking coffee. Next are the stairs to the basement, then the toilet, right at the back. Meanwhile, on the right, there are three tables, a pair of four-person ones and a solitary two-person one, although I suspect there were more pre-COVID.

Bold Street Coffee is still very loud, although at least I appreciated the 1980s classic rock that was playing when I came in (chosen by the barista and played on a turntable behind the counter).

A final thing that hasn’t changed is the excellence of the coffee. Bold Street Coffee currently has a bespoke house blend from Has Bean on espresso, which made for an excellent flat white, sweet and fruity. There are plans for this to be joined by a single-origin option in due course. Similarly, a return to serving V60 and AeroPress is on the cards, but for now there’s only batch brew, with two options, one from Has Bean, the other from a guest roaster, with a new option going up every three days or so. During my visit, the guest was from The Barn, with local roaster, Crosby Coffee, due on next.

I was there for lunch, Bold Street Coffee making much of its “Buoys”, toasted brioche buns with various fillings. I was tempted, but went for the BSC Veggie Fry, selecting poached eggs and extra toast, which was a good move. Although it came with toast, this was on the bottom with everything (homemade beans, spinach, mushroom, hash browns, plus my poached eggs) piled on top. It was, by the way, excellent, so much so that I could forgive it being served in a cardboard box!