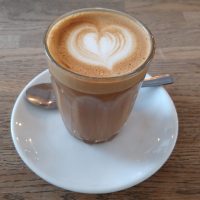 On Tuesday, I caught a train to London. I went to visit coffee shops, something I once took or granted, but which, thanks to COVID-19, I hadn’t done for almost exactly four months. Although I didn’t have a firm itinerary (I intended to wander around, see who was open, and take things from there), there was one coffee shop which I planned to visit, heading straight there from Waterloo.

Notes is on St Martin’s Lane, a stone’s throw from Trafalgar Square, which is how it gets its name. Like Attendant, where I ended Tuesday’s short excursion, I first wrote about Notes back in 2013, although, unlike Attendant, which had recently opened, Notes was already well-established by that point. Since then, I’ve visited several other Notes and have always been impressed by the quality and attention to detail.

Notes had reopened just four days before my visit, on Saturday 11th July, but I knew from its social media posts that it was offering a sit-in service, which I was keen to try. More than anything, I wanted to see how the reality of sitting in a coffee shop during the COVID-19 pandemic matched my (perhaps gloomy) musings on the matter.

Notes is at the southern end of St Martin’s Lane, near the corner with William IV Street. It has a narrow store front, but inside it goes a long way back. There’s always been a little outside seating, with the bench in front of the window, but these days, in response to COVID-19, the council has sectioned off the left-hand side of the road as you come south down St Martin’s Lane. This has created an outdoor seating area which Notes shares with the restaurant next door (there are other seating areas for restaurants and cafés further up St Martin’s Lane). It looks a little ugly, with chest-high steel mesh barriers in red and white footings, but it creates a safe space for the tables, the barriers protecting them from the traffic while at the same time keeping the pavement clear. All-in-all, an excellent idea.

Notes has four two-person tables out here, along with another two (much smaller) tables by the bench. If you sit outside, you can either order on-line or go inside to order. Talking of which, the interior of Notes, which is long and thin, looks much as I remember it. The counter is still on the left, running maybe halfway to the back, with seating opposite that. There’s also a window-bar to the left of the door and a much larger seating area at the back, centred under the skylight in the high ceiling. It’s also as elegant and well-appointed as I remember it.

However, there are some important changes, no doubt brought about by COVID-19. The counter, for a start, has the usual Perspex screens to protect staff and customers. Meanwhile, the four-person window-bar now only has two stools, while what was a row of closely-spaced two person tables along the bench opposite the counter has now been thinned out. Instead, there are just eight tables, pushed together in twos, forming four sets of four-person tables.

Most of the outside tables were occupied, so I took a seat inside, where two of the four tables opposite the counter were occupied (the back was empty). Although you can order in person, you’re strongly encouraging to use the Ritual App or to order from the website (there is a handy QR code on an instruction leaflet on each table which takes you straight to the order page).

I went the website route, ordering on my phone, which proved to be straightforward. The order page contains the menu, and, when you’re done, you just checkout. You have to provide your details (name, phone number and e-mail) although there’s no requirement to verify them. When your order is ready, the staff bring it to you, so there’s minimal contact between customers/staff.

The menu has changed, with a cut-down all-day brunch offering. Unfortunately, the poached eggs on toast had sold out, so I had scrambled eggs on toast instead, which were excellent, served on a single large slice of toast with a small salad on the side. Notes has a standard espresso-based menu, plus a single-origin filter on batch-brew. I ordered a cortado, made with the Acevedo espresso, a single-origin from Huila in Colombia which went really well in milk, with classic chocolate and caramel notes.

The best part of the whole experience was that my cortado was served in a glass, while my lunch arrived on a plate, with proper cutlery, a welcome change from the near-universal COVID-19 experience of takeaway cups and disposable plates/cutlery.

For my first sit-in coffee shop experience in four months, it was perfect. I felt relaxed and safe, even when several people came in to order takeaway coffee, standing near my table to order and wait for their coffee. It just felt so good to be sitting in a coffee shop again, drinking coffee from a proper cup (or, in this case, glass).