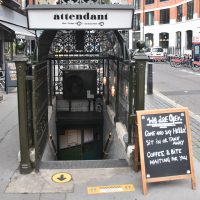 On Tuesday, for the first time in four months, I boarded a train. With the recent easing of restrictions on coffee shops in England, I was on my way to London, where I knew some coffee shops had started serving sit-in customers. And, if I’m honest, after four months of not going further than I could walk, I needed a change of scene. I didn’t have a firm plan: I was just going to take the train to Waterloo, cross the river, then wander around. I knew that some shops had reopened from their social media posts, but I wanted to check for myself. Mostly, though, I was just getting the lie of the land.

Of all the speciality shops that I found, the one that I least expected to be open was Attendant’s original location in Fitzrovia, the speciality coffee shop in a (disused) Victorian (men’s) public lavatory. And when I think of enticing places to have coffee during COVID-19, a small, underground coffee shop with no windows was not top of my list. But there it was, open and inviting me to come in and take a seat. Intrigued, I knew I had to try it out.

If you’re not familiar with Attendant, you can see what I wrote about it when I first visited, not long after it first opened in 2013. Back then, it was a single coffee shop in a converted Victorian public lavatory: these days, Attendant has expanded to a chain of three London coffee shops, which also roasts its own beans.

It all looked very familiar as I descended the broad steps on the corner of Foley Street, now with handy arrows showing which side to walk so that you don’t run into anyone coming out. At the bottom, there was the familiar corridor running off at 45  to the right which leads to the equally familiar main space at the end.

Attendant had a major refurbishment about a year ago, so the décor is different from what I remember, but other than a few (important) changes, everything else is the same, with the kitchen to the right, behind the old attendant’s window, followed by the counter. Meanwhile, on the left, you’ll find the urinals (converted to seating), while at the back, there is more seating in the form of tables.

Back in the day, the space was occupied by a single, large communal table, with padded benches around all three sides. These days, the padded benches are still there, but with three smaller tables, one on the left, two on the right. I suspect the change was made during the refurbishment, but the result is much more COVID-safe to use the new jargon.

Talking of which, another obvious change is at the counter, where Perspex screens run from counter-top to the ceiling. If you’ve come for takeaway, which you’ve been able to do since the start of June, when Attendant first reopened, then you need go no further than the start of the counter. Here you’ll find the menus, food on the Perspex screen, drinks above, plus a long, narrow opening at waist level for the card reader.

If you’re sitting-in, carry on and you’ll come to a sign asking you to wait to be seated. A member of staff will take your temperature with an infrared thermometer, while you’ll also be asked to provide contact details (name and telephone number). You’re then shown to a seat and given a menu, with the staff member returning to take your order. The menus are plastic coated, so easily wiped down, while the staff are happy to provide hand sanitiser.

I sat in the table section, where the three tables were well separated. Although I was the only person there, I’d have been happy if the other two tables were occupied. You can also sit at the urinals on the left, although the first three (there are six in all) are out of use (too close to the counter/takeaway customers).

Attendant has an impressive all-day breakfast/brunch/lunch menu with the usual classics, from which I ordered the banana toast, a single, thick slice of toasted banana bread, smothered in maple and vanilla bean mascarpone and mixed berry and elderflower compote. Served on a disposable cardboard tray with plastic cutlery, it was excellent.

I paired this with a cortado, served in a takeaway cup (I promptly transferred it to my HuskeeCup). Made with a naturally-processed Brazilian single-origin, it had a classic nut profile, rich and full-bodied. Attendant also serves filter coffee, currently a Colombian, which is fruity and more acidic than the espresso, offered as a V60 (Attendant stopped making batch-brew since everyone is ordering espresso-based drinks).

Although I’d been a little nervous coming in, I felt very safe and relaxed, the staff’s hospitality banishing my doubts.