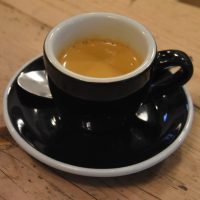 I have a soft spot for Attendant, which started in 2013 in a converted, underground gentlemen’s toilet in Fitzrovia. It could easily have been a gimmick, but from the outset, Attendant was committed to top-notch speciality coffee, first from Caravan then, more recently, roasting its own. It also expanded, opening shops in Shoreditch and Clerkenwell. The original Attendant featured in the early days of the Coffee Spot, soon after it had opened, plus it was one of the first coffee shops I visited when COVID-19 restrictions were relaxed in England in July.

All of this makes it rather bizarre that, until last week, I’d never been to Attendant Clerkenwell. What can I say? A lovely, quirky, irregularly-shaped spot with gloriously high ceilings, the loss is all mine. There’s outside seating, plus more seating inside, including a neat back room if you want something a little quieter. The offering is substantially the same as at the other Attendants, with its Brazilian single-origin on espresso, plus a single-origin filter option (currently only available as batch brew). This is backed up by a wide selection of cake and impressive breakfast, brunch and lunch menus, all prepared in the open kitchen behind the counter.

November 2020: with the new Government COVID-19 restrictions in England, Attendant is returning to takeaway service from Thursday, 5th November.

May 2021: Attendant is back to its normal opening hours following the relaxation of the COVID-19 restrictions in England to allow dining in.

Attendant Clerkenwell sits at the northern end of Leather Lane, home of the famous Prufrock Coffee. It’s on the western side of the street at the corner with Hatton Wall, where the buildings present a curved façade, giving the outside a great sense of space. Occupying about two-thirds of the façade, the main part is to the left (where you’ll find the door, flanked by two tall windows) with a narrower window to the right, separated by a wide stone pillar.

A pair of benches sit outside on the pavement, one either side of the door. The left-hand one has a small, square table, while there are two to the right. However, there’s more. Since the COVID-19 restrictions were eased in July, a further four two-person tables have appeared at the side of the street, the space (which was once occupied by street traders) marked out by low planters.

Inside, Attendant occupies a quirky space, long, thin and irregular, with wonderfully high ceilings. At its narrowest, it’s taller than it is wide, although there’s no real sense of this from the outside. The counter, which is in two parts, is to your right as you enter, while to your left, there’s a three-person window-bar. More seating occupies the left-hand wall, where a long, wooden bench houses three well-spaced two-person tables.

Since the façade of the building curves around the corner, the front of Attendant isn’t flat, with the narrow window to the right at about 30° to the other windows. The right-hand wall is at 90° to this window, while the left-hand wall is at roughly 75° to the front. As a result, Attendant quickly narrows, reaching a pinch-point at the end of the counter, the second part of which is parallel to the right-hand wall, further accelerating the narrowing.

I suspect that at this point, it was originally the end of the building’s front room, but these days the (admittedly very narrow) back wall has been knocked through, beyond which Attendant widens out again, forming a neat, five-sided back room with the same high ceilings. Admittedly, it’s still quite small, a large chuck occupied by an open staircase which descends steeply, turning back on itself, to a basement space which is currently off-limits.

There’s more seating back here, with a two-person round table at the top of stairs on the left. Meanwhile, a bench runs along the right-hand wall and continues along the two back walls which are at 30° to each other. A pair of round, two-person tables are on the right, with two rectangular four-person tables at back, all with low, comfortable, wooden-topped stools.

I’d just had breakfast at the nearby Caravan in Exmouth Market, otherwise I’d have been very tempted by the brunch menu. As it was, I settled for an espresso made with Attendant’s house espresso, a naturally-processed Brazilian Esmeralda. I’d had this in a cortado at Attendant Fitzrovia in July, where it went very well with the milk. On its own, it was just as good, with the same full-bodied, classic nut profile, but with a surprising sweetness.

At the moment, Attendant Clerkenwell is only offering batch brew through the Moccamaster (there’s usually a choice of V60 or AeroPress). To see me on my way, I tried the Finca Vera Cruz, a washed coffee (processed on the estate with an extended fermentation stage) from Colombia. It too was sweet and full-bodied, not what I was expecting from a washed coffee.

December 2020: Attendant Clerkenwell was a runner-up for the 2020 Best Physical Space Award.