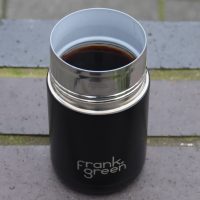 I’ve been a champion of reusable cups for a long time now, having amassed quite a collection over the years. One of the early ones I came across, at the 2015 London Coffee Festival to be precise, was the Frank Green SmartCup. There was a lot to like about the original Frank Green cup. It had an innovative design, an excellent, screw on, spill-proof lid and a layer of insulating plastic around its plastic core. I also liked the company (Frank Green) and its ethos. The only problem was, I didn’t like the cup, something I’ve felt bad about to this day.

Just to be clear, my not liking the cup doesn’t mean it’s a bad product. In many ways, it’s an excellent, innovative cup: it just wasn’t for me. It attempted to solve problems I didn’t have at the time. It was also plastic, and I just don’t like drinking out of plastic. Recently, Frank Green has launched a new ceramic reusable cup, and so I felt I owed it to Frank Green to try it out. When I saw one on sale in Attendant Clerkenwell at the end of last month, I took the plunge and bought it.

You can see what I made of my new cup, and whether I regret my impulse purchase, after the gallery.

Let’s start with some simple definitions. The Frank Green ceramic cup is not a ceramic cup in the sense that, say, the Therma Cup is. Whereas the Therma Cup is entirely ceramic, the Frank Green ceramic cup is actually made of stainless steel, with a ceramic lining on the inside. In terms of design, it has a lot in common with the original SmartCup. This had, at its core, a simple BPA-free plastic cylinder, surrounded by an integral, thermally-insulated plastic sleeve. At the top was a screw-on plastic lid, which we’ll come back to.

At first sight, the new ceramic cup looks identical and, in fact, they share the same lid. However, pick one up and you’ll notice the first difference: the plastic sleeve is now stainless steel. This makes the cup slightly heavier but, to me at least, it has a much nicer feel to it. The other difference is when you take the lid off. Inside, the original’s plastic cylinder has been replaced by a stainless steel one and, if you look inside, you’ll see the eponymous ceramic lining.

The ceramic cup comes in three sizes, 6 oz, 10 oz and (way too big for me) 16 oz, which neatly dovetails with the original range, which now comes in just two sizes, 8 oz and 12 oz. Part of me wanted to get the 6 oz cup, which is ideal for flat whites, but, when it comes to takeaway flat whites, my go-to is the HuskeeCup and, honestly, I don’t see anything replacing that.

While I’m glad that there is a small cup for flat white lovers, and I’m sure it will appeal to some, for me, it suffers from the same problem that I experienced with the original cup, where I had an 8 oz SmartCup. One of the main selling points of the Frank Green range is that they are insulated, keeping their contents warm. The downside to this is that you have a significantly bulkier cup compared to say a traditional KeepCup or my HuskeeCup. However, when I get a flat white to go, I invariably drink it straight away, so (for me at least), keeping the drink warm wasn’t an issue.

Instead, I looked one size up, to the 10 oz (300 ml) cup, which is perfect for a pour-over. Back in 2015, when I got my original Frank Green cups (I also had a 12 oz original), I didn’t drink takeaway filter coffee and so, again, the thermal insultation wasn’t offering me anything I needed. However, I then got a Travel Press, and that really changed the way I look at things. Now I’ll quite happily make up a Travel Press before I go hiking, for example, and drink it on the way. Suddenly, a cup that can keep my coffee warm is starting to look more interesting.

With all this in mind, when I saw the 10 oz Frank Green ceramic cup on display at Attendant Clerkenwell at the end of October, I bought one. You can see what I made of it after the gallery.

One of the interesting things about the 10 oz ceramic Frank Green is that it’s the same height and diameter as the 12 oz original, but its interior dimensions are a little bit smaller, hence the lower capacity. All the cups in the two ranges share the same lids, which is useful and, indeed, can you buy the lids and bases separately on the Frank Green website.

Although the two cups are the same size, the 8 oz ceramic is about 50 g heavier, weighing in at 175 g compared to the 125 g of the 10 oz original (both weights without the lid). Like its plastic cousin, you’re not supposed to fill it to the top (at least not if you want to put the lid on), but the line showing the fill limit is on the outside, which makes it hard to judge. It’s also very hard to see, since it’s only on one side and is in white on stainless steel.

Turning to the standard Frank Green lid, it’s all plastic, with a single, large button in the centre. Press this down and a small drinking hole opens on one side, with an even smaller air hole on the other (so air can come in to replace the liquid). When the button is pressed again, it pops up flush with the lid, closing both holes.

I never drink my coffee with the lid on (this applies to all my reusable cups, I always take the lid off before I drink) so I can’t tell you what impact it has on the taste/sensation. However, I do know that with the lid screwed on and the holes closed, it is leak proof. I’ve done the usual turn-it-upside-down test and I’ve also had full cups in both my pocket and in various bags and it doesn’t drip. I can also reveal that if you do forget to press the button and leave it open, it’s not a disaster. I did this once and got a little bit of leakage in my bag, but it was by no means a catastrophe.

So that’s the cup. But what’s it actually like in action. Well, I’ve been road-testing it for the last three weeks and you can find out how it fared after the gallery.

I took my new cup out on three separate occasions. The first time, I made a pour-over directly into the cup and popped it in my pocket before going on a short hike (my daily walk for those who follow me on Twitter/Instagram) in the Surrey Hills. I stopped after about an hour to have the coffee. On the second occasion, I took my cup to Canopy Coffee, where I had a batch brew. I drank a little bit there, then popped the lid on and brought it home, drinking it half an hour later. The third test was on Friday, when I made another pour-over, taking the cup on a two-hour hike to the Surrey Sports Park, where I drank my coffee.

Firstly, what’s it like drinking from the cup? Well, it was okay. Sorry to be underwhelming, but if I’m honest, I’m a snob and nothing is going to beat drinking from something like my ceramic Therma Cup. That said, it was a perfectly acceptable experience and certainly far better than drinking from plastic. As for taste, there was a little degradation, which comes, I think, from the coffee being left standing in the cup for so long. I expect this with my other cups, so it was no surprise and didn’t mar my enjoyment o the coffee.

It’s worth pointing out that the Frank Green cups are not vacuum flasks, but they do keep their contents warm (or, if you put cold liquids in, chilled). Each time I filled it up, the cup was noticeably warm to the touch (but not hot) and in my three tests (½ hour, an hour and two hours) the coffee was cooler than when I started, but at a perfectly drinkable temperature. Indeed, in the case of the half hour stroll back from Canopy, this was enough to cool it down from being slightly too hot to a perfect drinking temperature.

So, to the key question: will I keep using it? Time, of course, will tell, but I think the answer is almost certainly yes. It’s an interesting cup: I can’t, for example, see me using it for flat whites or lattes unless it’s the only cup I have on me, but I can see it being useful if I know ahead of time that I’m going to get a filter coffee. Where it will really come into its own is hiking/travelling, when I can see me making a pour-over or cafetiere before I go, pouring it into the Frank Green and enjoying it an hour or two later…