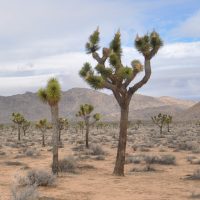 Welcome to the second instalment of The Grand Adventure, part of a series of Travel Spot posts covering my trip to America in January/February 2017. The Grand Adventure itself is the week-long drive I took from Phoenix to San Francisco via Joshua Tree National Park and Los Angeles, a total of 1,2000 miles.

In Part I, I left Phoenix, driving via Wickenburg, Arizona, to Joshua Tree, California, where I arrived in time for a short hike in the park at sunset. In this, Part II, I spend a day in the park and then continue my drive to the west, arriving in Los Angeles after nightfall.

The remaining parts of The Grand Adventure detail my day in Los Angeles and the drive up the Californian coast to San Francisco, while the remainder of the trip, where I flew from San Francisco to Chicago, Miami and Providence before flying home from Boston, is covered by a separate series of posts.

You can see what I got up to in the Joshua Tree National Park after the gallery.

Other than the rainstorm which had hit on Friday night as I was leaving Phoenix, I’d done well to avoid the rain, although my luck was about to run out. I’d arrived in Twentynine Palms to blue skies the previous afternoon, although it had clouded over shortly after dusk and there had been more rain overnight. I awoke that Sunday morning to grey clouds and an unpromising weather forecast, although short of skipping Joshua Tree altogether, I didn’t have any flexibility in my schedule, so set off anyway.

I checked out of my motel and made the short drive back to the entrance of Joshua Tree National Park, stopping only for breakfast at Denny’s, this time having eggs, grits, pancakes, toast and a muffin. Fortunately, the Denny’s was on my way, halfway between the hotel and the turning for the park, a mere two-minute drive from either.

Suitably fortified, I set off, driving into the park and on, past Skull Rock, where I’d hiked the night before. My plan was to drive west/northwest through the park, following Park Boulevard, which would take me out to the west of Twentynine Palms, where I’d pick up Route 62, following that down to I-10 and then on to Los Angeles. However, before I did that, I wanted to get out and have a couple of short hikes in the park itself.

My first stop was just was after Skull Rock. I’d be driving for about 20 minutes and pulled over to get a closer look at the eponymous Joshua trees. I’d seen one or two the night before, but this was the first time I’d seen them en masse, stretching off as far as the eye could see on either side of the road. Not quite a forest, but the closest I was going to get.

From there, I carried on west to the trailhead for Ryan Mountain, where I parked up and got out for the first of two short hikes.

The truth is, there’s not much to tell about the hike, which was glorious, that you can’t gather from the photographs in the gallery. Ryan Mountain is part of a north-south ridge that extends well to the south, the trailhead being at the northern end. It’s a couple of kilometres from the summit, a steady climb of about 300 metres. At the start, there are some commanding views to the north, where you get the sweep of the valley, with Park Boulevard snaking its way through the landscape. There are mountains in all directions and, when you get to the top, great 360° panoramas.

It took me exactly an hour to reach the summit and I really wanted to go further. It was great weather for hiking (given that it was January), 7°C, with partial cloud cover, and the park is criss-crossed with trails. However, I was on a tight time budget and had to get to Los Angeles that night, which meant leaving the park before it got dark.

I’d deliberately planned this part of the trip that way: everywhere I was going was new to me and I had no idea if I would like any of the places I was visiting, so didn’t want to donate significant chunks of time to any one area since it would mean missing out on others. For example, I’d only allowed myself a single day in Los Angeles. While I could have spent longer there, that would have meant missing out on the drive up the coast, or skipping Joshua Tree altogether.

I often do that when I’m going somewhere new. I look upon it as a fact-finding trip, figuring that if I really like a place, I can always come back another time for a longer stay. So, with one last 360° sweep of the horizon and all the places I could have gone, I started back down the trail.

One other thing of note: even though it was a Sunday, there was hardly anyone there. I didn’t meet anyone at the summit and I only passed two other people and a pair of horse riders on the entire hike, which took me two hours. That suited me just fine: I’m a solitary soul and used to hiking on my own. However, never forget that Joshua Tree and its ilk, for all their access roads and signposts, are wild, wild places.

That was brought home to me a year later when Claire Nelson, someone I follow on Twitter (and an experienced traveller and hiker), went hiking in the park, wandered off the trail (easy enough to do) then fell about 20 feet from a boulder, shattering her pelvis in the process. She spent three nights in the open and was within hours of dying from exposure when the rescue helicopter found her.

I learnt all this after the fact, following her story on twitter as she slowly recovered from her injuries. Claire wrote a book about her ordeal, Things I Learned from Falling, which was one of the best books I read when it came out last year. It’s not just about Joshua Tree and her accident: it’s much more than that and I can’t recommend it highly enough.

Not that I knew any of that as I hiked back down to my car, but I often wonder, what would happen if a similar accident befell me?

You can find out what else I got up to in Joshua Tree and how the drive to Los Angeles went after the gallery.

From Ryan Mountain, I followed Park Boulevard around to the southwest and past the Hall of Horrors Area (which, on another day, I would have stopped to explore). The road then looped around, heading northwest on its way out of the park. At this point, I could have simply kept driving, leaving Joshua Tree National Park and heading on to Los Angeles, but since I still had a bit of time left, I turned off after 10 minutes, looping back east to the Parker Dam Nature Trail for one last hike.

Until like the Ryan Mountain trail, which was there and back, this was a loop, plus it was much shorter, maybe 30 minutes’ walking in all. From the car park, the boulder strewn trail led north to Barker Dam, built by cattle ranchers at the start of the 20th century, back when the park was (briefly) used to graze cattle. The reservoir it created is still there today, a slightly surreal sight, hidden in amongst the boulders.

From the dam, the trail returns via a broad valley where there are some petroglyphs left by the area’s original (human) inhabitants, scratched into the rock at the back of a cave. Illustrating my point about how easy it is to get lost in Joshua Tree, I managed to wander off the trail along the valley bottom, only picking it up again when I found the petroglyphs.

Back at the car park it was time to leave, so I headed out of the park, re-joining Highway 62, which runs in a straight line, east to west, along the park’s northern boundary. It had already been spitting with rain in the park, but now the rain came steadily down. I passed through Yucca Valley and then, with the road curving southwest, I drove through Morongo Valley.

Here the road turned south and dropped dramatically, mountains rearing up on either side. The views were spectacular as it was, but I’m sure that they would have been even better without the rain! After dropping down to the broad plain below, the road ran pretty much due south to its junction with I-10, where I joined the freeway which would take me to Los Angeles, another 100 miles away to the west.

Looking at the map, it seems a fairly dramatic drive, with mountains to either side, but particularly to the north. However, with night falling and the rain hammering down, I saw very little of the scenery. Initially I’d hoped to drive all the way to my motel in Los Angeles, eating when I got there, but the torrential rain made the already heavy traffic very slow, particularly when there was standing water on some of the lanes. I managed to avoid the worst of it, but some of the trucks on the inside lanes were ploughing up large bow waves as they pushed their way through.

I had figured on the drive along I-10 taking two hours at most, but as the rain got worse and I became increasingly tired/hungry, I pulled off the freeway at a random exit in search of something to eat. As luck would have it, there was an Italian restaurant within a block of the freeway exit, so I had dinner there, which made for a nice break from the driving.

After about an hour, and feeling suitably recharged, I was on my way again. No sooner had I pulled out of the parking lot than the whole area was plunged into darkness courtesy of a power cut. What perfect timing!

I had about an hour to go to my motel and soon as I was making my way through the outskirts of Los Angeles. For those not used to US cities, the freeways tend to go through the centres and Los Angeles is no different, with I-10 taking me right into the heart of the city, where I picked up US 101, which took me almost all the way to my hotel on Sunset Boulevard, where I arrived at 19:30.

I had been really worried about unloading the car in the pouring rain, but my stop had worked to my advantage. Not only had I managed to avoid the worst of the evening traffic, but by the time I got to my motel, it had stopped raining…