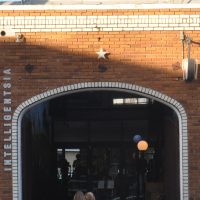 This is a first for the Coffee Spot. Almost four years ago to the day, I was in Intelligentsia on Abbot Kinney Boulevard in Venice, Los Angeles, following a recommendation from Lee Gaze of Silhouette. It was during my first visit to the city and, while I really liked it, I didn’t have time to finish my write up during my busy trip, so it languished on my hard drive instead. As weeks turned to months, and months turned to years, it seemed increasingly pointless to publish an out-of-date Coffee Spot, so that’s where it stayed, languished on my hard drive.

However, with the COVID-19 pandemic continuing to limit both my travel and my ability to visit (and hence write about) coffee shops, at the start of the year I decided to return to my backlog of Travel Spots, which led to me to continue writing up The Grand Adventure (as I call my drive from Phoenix to San Francisco, undertaken in January 2017). And that, in turn, has provided the perfect excuse to dust off my notes and old photos of Intelligentsia…

So, let me present Intelligentsia’s Venice coffee bar, exactly as I found it three years and 363 days ago.

Intelligentsia, on the northern side of Abbot Kinney Boulevard, is easily missed. The entrance is via a large brick archway, the word “Intelligentsia” written fairly subtly in white letters to the left and the famous Intelligentsia star at the top. There’s also a second entrance at the back, on S Irving Tabor Court, which is considerably more prominent (there is abundant on-street parking here, although you can also park on Abbot Kinney Boulevard as well).

Entering via the alley on Abbot Kinney Boulevard, a ramp on the left leads to glass double doors at the back, while there are a pair of narrow tables on the right, followed by a wooden terrace if you want a relatively sheltered spot to sit outside (the alley is open to the sky). Alternatively, entering at the back brings you to a raised platform at the back of Intelligentsia, with access down a short flight of steps on the left-hand side (directly ahead of you as you enter).

Inside, Intelligentsia has a very industrial feel, the space open all the way to the roof, which soars above you, although there’s a false glass ceiling above the front half of the store, with air-conditioning conduits above that. A very bright space, there are windows front and back, plus skylights in the ceiling.

Central to Intelligentsia is its island counter, consisting of various steel cages and open counter tops, the front portion of which is half an octagon, the side holding the cake facing you as you enter. A sign here instructs you to wait for a barista, who will greet you, taking your order and directing you either left or right, where you’ll find twin espresso stations on the octagon’s diagonals. Each has a two-group Synesso, workings exposed by a half-glass casing, plus a pair of grinders, one for the ubiquitous Black Cat, the other for the single-origin espresso. Beyond them, at either end of a central counter, are two pour-over stations, where V60s and Chemex are prepared.

Beyond this, the symmetry falls apart. A third espresso station is on the right, while a broad, L-shaped table-top occupies the left and back sides of the counter, where you can sit with your laptop (I think it might be obligatory; I didn’t see anyone there without one!). There’s more seating at the front, where the pleasing symmetry is restored, with padded, L-shaped benches in the corners to the left and right. Each has a single thin, high-table (ideal for laptops) and two small, low coffee tables. Beyond these are twin retail racks, one for each wall, but the symmetry fails again at the back, where the flight of stairs on the left leads up to the rear entrance.

Anyone looking for a balancing flight on the right will be disappointed as instead a short corridor leads back to the toilets. The back door, which is at the top of the stairs, is about a metre above the main floor, with a platform that runs almost the full width of Intelligentsia, a row of five narrow two-person tables running along the front. Meanwhile a padded bench runs along the bottom, completing the seating.

The coffee is all roasted in-house, the ubiquitous Black Cat blend on espresso, joined by a daily single-origin, with three more daily options on pour-over (two single-origins and a blend). I opted for the single-origin espresso, which was from Rwanda. This had a bit of an “oh wow” kick on the first sip, but calmed down after that. It had plenty of body and a nicely-rounded mouthfeel, turning out nowhere near as sharp as I had feared it might be.

To accompany it, I had the apple and caramel pie as a surrogate lunch. Consisting of big chunks of apple in a pastry case, with crumble on top, it was as awesome as I expected it to be (and I had high expectations).

Note that although this write-up is from my visit in 2017, I’ve put the current (2021) opening times in the table above. Intelligentsia is only open for takeaway service due to the COVID-19 pandemic and is operating under restricted opening hours.

You can also see what I made of the other Intelligentsia locations that I’ve visited.