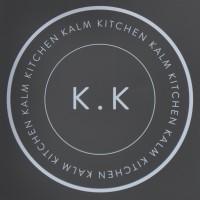 Glutton & Glee was one of the first places that I wrote about when I started the Coffee Spot in 2012. It’s also in my home-town of Guildford. Back then, with the exception of Bar des Arts, it was a lonely beacon of speciality coffee in a town full of chains. These days, despite the loss of Bar des Arts, it’s slightly less lonely, particularly with recent developments on Chapel Street and elsewhere. It’s also changed its name.

After four years as Glutton & Glee, it became the Kalm Kitchen Café in February 2015. At first, the change was almost imperceptible, but as the year went on, it became more noticeable, although some things, such as Allpress’ Redchurch blend on the espresso machine, remained the same. The sign above the door still said “Glutton & Glee” too, and each time I visited, the staff told me that the rebranding/redecorating would be happening soon.

Then, one day, I went by and it said “Kalm Kitchen” above the door, so I made a note to come back with my camera. And so, yesterday, I did, finally having the perfect combination of a sunny day, my camera and a spare hour or two…

November 2019: Kalm Kitchen has (rather abruptly) closed its doors this month for the final time. I’m not sure what, if anything, is going to replace it.

November 2021: Kalm Kitchen has a successor, Tattam’s, which opened briefly in October 2020, almost immediately moving to takeaway operation due to the COVID-19 pandemic. A fire caused severe damage in early 2021, forcing it to close until November for refurbishment. The good news is that Tattam’s is now open and going strong.

The change from Glutton & Glee was caused by a change of ownership, Kalm Kitchen being a wedding catering company. Rather sensibly, the new owners took their time, a process of slow evolution rather than a big-bang approach. However, now that the make-over is complete, there is quite a difference, even if each individual change was quite small.

I always thought of Glutton & Glee as a coffee-and-cake shop that did food, whereas the feel I get from Kalm Kitchen Café is that there’s more of an emphasis on the food, although the coffee and cakes are still there. The former comes from London’s Allpress, with the ubiquitous Redchurch blend on espresso along with an excellent decaf. A Colombian blend is also available as pour-over through the V60 and cafetiere. However, these aren’t heavily advertised, so you’ll have to ask.

The cake range is probably slightly reduced from Glutton & Glee days and it’s all baked in-house at Kalm Kitchen’s Puttenham HQ. Nevertheless, Kalm Kitchen Café still makes for a good coffee-and-cake stop. The food range feels to me slightly expanded and the counter-top has been rearranged to make the food more central to the offering at the expense of the cakes, which used to dominate. The espresso machine has been moved, while the kitchen feels more open, all of which leads to a much more connected space, which I like.

Kalm Kitchen’s effectively the same space, but whereas Glutton & Glee could seat 20 inside, Kalm Kitchen fits in 26 without feeling any more cramped. Downstairs, a pair of two-person tables (down from three) occupy the window, with the addition of a four-person bar on the right-hand side between the window and stairs. Upstairs, the layout is again subtly different. Three two-person tables still occupy the windows at the front, while the two four-person tables against the left-hand wall remain, but on the right, against the stairs, there’s a new addition, another four-person bar.

Outside is perhaps where Kalm Kitchen has made the biggest changes, although I can’t remember exactly how it was in Glutton & Glee’s final days. There are a pair of tables outside on the pavement on Tunsgate and two more out back on Milkhouse Gate. What’s more, the back terrace has been spruced up, with two four-person tables, which means that you can seat 16 people outside (as long as it’s not raining).

All-in-all, the change is good and I’m glad Kalm Kitchen is around. The coffee’s good, as are the cakes (I’ve sampled both a number of times since the change of ownership) and although I’ve not eaten there, the food looks even better. Best of all, the same cosy, friendly atmosphere remains.

You can also see what local cafe blogger, Katie, makes of Kalm Kitchen (disclaimer: she also works there).