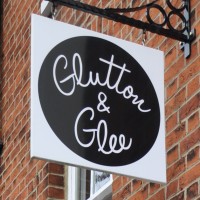 I must confess to being a bit slow off the mark with Glutton & Glee. It had been open for 18 months before I made my first visit, but I can guarantee it won’t be another 18 months before my next. Tucked away just off the High Street on Tunsgate, it’s somewhere I’ve always been aware of, but somehow I’ve never gotten around to visiting. Definitely my loss.

In many ways, Glutton & Glee is an old-fashioned British Tea Room with a modern coffee shop twist on the top. The bottom line is that it serves delicious cakes from the fantastic Butter & Cream Cakes (which you can find on Guildford’s North Street Market) as well as excellent coffee and (so I’m told by my tea-drinking friends) lovely tea. My approval in that direction stops at admiring the very fine teapots.

Glutton & Glee also does breakfast/brunch, lunch and sandwiches, but in my head it’s really an afternoon coffee and cake place of the sort that Guildford doesn’t really have enough of. Be warned though: it is small and it can be very busy, but at no point did I feel crowded out or cramped.

December 2015: Glutton & Glee changed hands earlier this year and has rebranded as Kalm Kitchen Cafe. You can see what I made of it when I visited in February 2016.
You can read more of my thoughts after the gallery.

This post could be effectively entitled a tale of two coffee shops: Glutton & Glee and my favourite Guildford Coffee Spot, Bar Des Arts. In fact, it’s more a tale of two names and a salutary tale of first impressions, since comparing the two is a bit like comparing chalk and cheese. I like them both, but they fill very different niches in my life.

As I’ve written elsewhere, I was immediately drawn to Bars Des Arts by the name and it delivered on its promise. In the case of Glutton & Glee, I was similarly attracted by the name, but the reality differed enough from expectation that it’s taken me 18 months to fully appreciate this wonderful little café. As I’ve said, the loss is mine.

Maybe it’s just me or my (middle) age, but Glutton & Glee immediately conjures images of traditional British puddings: steamed treacle sponges, jam roly-poly and Spotted Dick (if you have to ask, don’t). All, of course, drowning in custard. This, however, is not what Glutton & Glee is all about and it’s taken me this long to get my head around the fact. This is not a criticism, more an insight into the lasting consequences of first impressions (It can also be applied to the Coffee Spot; sometimes I think I should have gone with the tag line: “It’s not just about the coffee”). When I think of the name Glutton & Glee, rather than the place, what springs to mind is the excellent Anna’s Tea Rooms in Conwy.

However, I digress. Glutton & Glee is a cross between an old-fashioned British Tea Shop and a coffee shop, with breakfast and lunch thrown in as well. For me, the main draw is the excellent array of cakes on offer, although I can see it becoming a breakfast spot as well (be aware that it stops serving the brunch menu at noon). So far I’ve only had chance to sample the coffee and walnut cake, but all the cakes on display looked delicious. It’s also nice to see somewhere offering a fairly traditional range of British cakes; not something you get that often.

What finally won me over, other than the cake, is the philosophy of Glutton & Glee, with its emphasis on local produce and support for local businesses. You can see the full list of suppliers on the website. In these days of (multi) national coffee chains (I ran out of fingers counting the Starbucks, Costas and Neros in Guildford and wasn’t prepared to take my shoes and socks off to continue the exercise), it’s nice to see something firmly rooted in the local community.

Be warned, though, it’s quite small, with space for six downstairs and about 14 upstairs. There’s also a little terrace at the back, away from any traffic, but it’s not exactly huge. Being so small, you could forgive Glutton & Glee for not wanting to attract the laptop crowd, since we can have a reputation of table hogging, but instead I rarely go past without seeing one or two folks with laptops sitting in the window seats. Glutton & Glee also thoughtfully provides power and free Wifi. It’s almost as if the staff don’t want you to leave. Ever…