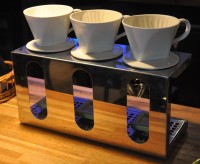 On Monday I was lucky enough to be invited along to a coffee tasting at my favourite Guildford Coffee Spot, Bar des Arts. I’ve always liked the ambience at Bar des Arts, but Sara, the owner, wants to take the coffee up to the next level. To this end she invited local roaster, Bradley, from Horsham Coffee Roaster, to come along with some samples of his blends and single origin beans. I was asked pop down to help her and one of the baristas, Jon, to try them out!

Note that strictly speaking this wasn’t a cupping; we weren’t taste-testing lots of coffee, just trying a few of Bradley’s samples (three pour-overs and two espresso blends) to see how they shaped up. We were also trying out Bar des Arts new brew bar, with its ceramic filters, for the first time. Finally, we ambushed a few unsuspecting regular customers and got their opinions too!

You can find out how we got on after the gallery.

I have complained before that Guildford doesn’t really have a speciality coffee shop, which isn’t meant as a criticism of either of my favourites, Bar des Arts (where I come for the relaxed atmosphere) or Glutton & Glee (where I head for my cake fix). However, spotting a gap in the market, Bar des Arts has teamed up with Horsham Coffee Roaster to take its coffee up to the next level.

The official launch of the new coffee menu is a little way off, but I was given a sneak preview when I was invited down to taste some of the new offerings. It also meant that I got to meet Bradley, of Horsham Coffee Roaster, who I’d heard great things about.

One of the great things about the explosion of third-wave coffee in the last few years has been the resurgence of brewing methods that have tended to fall by the wayside with the rise of the espresso machine [and, along with it, the rise of the bucket of milk with a shot or two of (often poor) espresso as the default drink]. Now, don’t get me wrong: I’m first in line when there’s decent espresso to be had, but I’m also fascinated by the various made-on-demand drip-filters and pour-overs that are becoming commonplace in many coffee spots.

When I started the Coffee Spot back in September, I was completely ignorant of this facet of coffee-making. At home, I relied on my trusty cafetiere and, in my head, drip-filter meant made-in-bulk, left-to-stew, frankly not very good coffee that I wouldn’t drink if you paid me. It certainly didn’t mean exquisite single-estate beans producing delicate, amazing cups of coffee.

Since then I have learnt the error of my ways and so was delighted to see that Bar des Arts had invested in a shiny new brew bar, a set of ceramic filters and a lovely, long-spouted pouring kettle. It’s official. I now have kettle envy. Do you think Sara would notice it if I “borrowed” it?

Jon and I started on the pour-over. Bradley had brought the following samples, all roasted within the last day or so:

It might just be me, but one of the nice things about coffee is the ritual associated with making it. At home, making an espresso on my Rancilio Silvia as much part of the enjoyment as drinking it. Sadly, these days much of that ritual is, in coffee shops at least, hidden behind the bulk of the espresso machine. However, the brew bar is an opportunity to bring the ritual back to the customers, with places such as London’s TAP No 114 and Free State Coffee having a specific brew bar where you can sit and watch the coffee being prepared.

I was therefore pleased to see that the Bar des Arts brew bar was right up there on the counter where I could watch Bradley go about his craft. Hopefully this is the brew bar’s permanent home, not just a one-off for the tasting.

Of the three beans that Bradley had brought along, two were very much to my taste; full of body, good, strong flavour, not too bitter. I’d been warned about the third, the Yirgacheffe, which I’d struggled with before. Bradley feared that its fruity overtones might prove too much for me. As it was, either I had over-hyped my dislike of fruity/sweet coffee or my palette is maturing, since I didn’t dislike it nearly as much as I thought I would! In fact, I really quite liked it (but don’t tell anyone I said that!), although I still preferred the other two.

Of course, one of the joys of a good brew bar is that you can offer a variety of beans. If things go according to the current plan, Bar des Arts will be offering one or two regular beans with a guest bean on rotation.

[As an interesting aside, Bradley also left me with a sample of the Yirgacheffe to take home. I’ve been playing with it in my Aeropress and so far have been pretty impressed. Maybe it’s the way that Bradley roasts it.]

Next we moved onto the espresso. Bradley had two blends for us:

Bar des Arts has been trialling the Brazil-Guatemala blend which has already proved a hit in its espresso martinis (as an aside, if you’ve read my piece on the London Coffee Festival then you’ll know that I’m not a big fan of putting things in my coffee, certainly not alcohol: however, I had a sip of the espresso martini and it was absolutely gorgeous!). I think that the Brazil-Guatemala blend will make a good standard espresso for Bar des Arts: Bradley made us some single-shot espressos and a flat white, both of which were excellent. We also tried it out on a couple of regulars who just happened to be in that afternoon; they declared it a big hit.

The second espresso blend was more adventurous. Again, I was surprised by how much I liked it, although I have to say that I preferred the Brazil-Guatemala blend. This one was a little too fruity for me. It also made a good flat white but I thought it got a little lost in the milk, rather than the milk enhancing the flavours of the coffee. However, that was a minor point.

When all’s said and done, it was a very successful day. We liked all the samples that Bradley brought down and it was great to have a chance to meet and talk coffee with him. I’m sure that whatever blends/beans Bar des Arts decides on, it’ll be serving some great coffee.

[The tasting was followed-up with some staff training and then the new coffee menu was launched on Saturday, 20th July. Naturally the Coffee Spot was there].