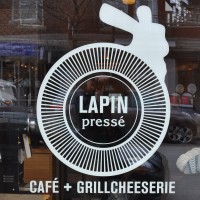 Le Lapin Pressé, owned by a pair of opera singers, is an interesting place, styling itself a “café+grillcheeserie”. It’s nice to know that North Americans mangle the French language with the same brutality that they employ on English!

Loosely translated, Le Lapin Pressé is “the hurried rabbit”, giving the impression of a rabbit, high on caffeine, charging around the place. In that respect, it is reminiscent of Newcastle’s 9Bar Coffee, which also serves coffee and toasted-cheese sandwiches. However, that’s where the similarity ends. While 9Bar goes for the pumped up, buzzing atmosphere, Le Lapin Pressé is bizarrely as far from the image conjured up by its name as you can get. With quiet music humming away in the background and clientele to match, it’s as laid-back as Flat Caps Coffee.

While many Montréal cafés focus on local produce, the exception seems to be the coffee beans themselves, with west-coast roasters predominating. Le Lapin Pressé, in contrast, stocks local roasters Saint Henri, which I was keen to try. I ordered an espresso which, while surprisingly sweet, was otherwise lovely, very well made and served in a fine blue cup. Continuing a trend I’ve noticed in many places, it came as a short double-shot, which did nothing for my attempts to moderate my caffeine intake for the day.

I was also keen to try the grilled-cheese sandwiches, especially since outside it was down to -5C with a biting wind for good measure! With the menu entirely in French, I was a bit bamboozled until the friendly and knowledgeable staff rescued me. The deciding factor turned out to be the vegetarian options, which narrowed the choice all the way down to the “Cheddar Fort”. Fortunately, it was delicious!

My next challenge was finding somewhere to sit. Le Lapin Pressé is tucked into an “interesting” (and small) space. Effectively ‘L’-shaped, you enter at the top, facing a counter running away to your right, the window behind you. There’s a bar with five chairs at the corner, with the main seating, what there is of it, in a little square in the other part of the ‘L’. This has been wonderfully kitted-out with wooden benches around three sides, leaving space for five tables and around 10 people if everyone squashes up. The only thing I didn’t like was the narrow mirror running around all the seating at face level, which meant that I could see myself pretty much wherever I looked… I suppose if everyone else has to put up with looking at me, there’s no reason I should be exempt!

Given the lack of space, Le Lapin Pressé is remarkably laptop-friendly, with free wifi and a pair of power sockets at each table. Although it was full during my visit, the staff didn’t seem to mind the three customers, each with laptop, who’d been there when I arrived and were still there when I left. In fact, the space is the only thing that would hold me back from becoming a regular at Le Lapin Pressé if I lived in the area. The coffee is certainly worth it, and, if I got a seat, I could happily stay there all afternoon. Getting that seat’s the problem though: in the hour I was there, the only person to leave was a staff-member whose shift had ended…