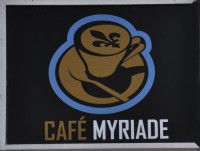 Café Myriade can claim to have planted the seeds of the wave of new coffee spots emerging in Montréal in the last 18 months. It opened back in 2008 and many of the recent crop, including Pikolo Espresso and Le Couteau/The Knife, can trace their lineage and/or inspiration back to Myriade and its owner, Anthony. It can also stake a claim to having introduced the awesome-looking Kees van der Westen Triplette espresso machine to Montréal.

However, despite this impressive heritage, I very nearly walked out of Myriade about 10 seconds after walking in. It was heaving, all the tables were taken, there was a queue at the counter and the loud music was really very loud. To cap it all, I was in a foul mood. However, I forced myself to stay and was very glad that I did.

Once I’d settled down and got a table, I found that I loved the place. The atmosphere was great, as was the music, although it won’t be to everyone’s tastes. The coffee was excellent and the staff knowledgeable and helpful. Even the other customers were friendly! What’s more, it’s right in the heart of downtown Montréal where independent coffee spots seem thin on the ground.

Café Myriade is probably something of an acquired taste: it certainly took me a while to get a feel for the place. It’s fairly small; nowhere near as tiny as the various stand-up espresso bars I’d just been visiting in New York, but for a sit down place, it was pretty cramped. Other than the counter in the corner opposite the door, the space was given over to nine square tables, each seating a couple of people, with room for a couple more people to squeeze in at the ends, making space for about 20 in all. However, that’s a very cramped 20 and, having waited five minutes to get a table and then squeezed into my corner, I had a feeling I wasn’t going anywhere in a hurry!

I was there around six o’clock on a very wet Tuesday evening which might have had something to do with the large crowd. It’s also just around the corner from Concordia University and it felt quite a student clientel, with a pretty high turnover of customers. At least that meant waiting for a table was a viable option. In fairness I should say that there is quite a bit of outside seating, just not on a cold, rainy Tuesday.

Once I’d gotten used to it, I found that the atmosphere was very much to my taste. The pounding heavy metal music could be too loud and oppressive for some, but it’s how I like it and added to the atmosphere. Myriade, however, is not somewhere for a quiet chat: the bare-brick walls and tiled floor amplify the music and the constant hum (roar?) of conversation, which all makes for a very noisy interior. Despite that, there were quite a few people obviously there for a (noisy) chat over coffee.

In keeping with many of the places I visited in Montréal, Myriade is all about the coffee; aside from a small selection of pastries (and tea & hot chocolate for non-coffee drinkers) it’s devoted to coffee, although a special mention should be made for the real hot chocolate on offer! As well as the obligatory drip filter coffee and the usual espresso-based drinks, there’s a V60 option and something called the Walkure Koffeemaschine (I had to ask… it has a ceramic filter and is close in design to a cafetiere).

While I was there, Café Myriade had three espresso blends, one of which (the Epic) was also available as a decaf espresso, plus another six single-origin beans for sale. Anthony, the owner, explained that he uses a range of roasters, including Chicago’s Intelligentsia and Vancouver’s 49th Parallel. My espresso was lovely and, contrary to popular belief, when I’m wound-up and in a bad mood, a good espresso will relax and calm me down, which this one did to perfection.

Thus restored, I had a long chat with Anthony and a couple of customers who inserted themselves into the conversation. All sang the praises of Myriade (although you’d expect that from Anthony!): one couple had come to try the café, while another, Jovan the poet, was a regular who also impressed on me the necessity of visiting Le Lapin Pressé. Finally, Anthony gave me a long list of other places I should try, including Pikolo Espresso and Le Couteau/The Knife.

October 2018: there are now five Cafe Myriades. Le Couteau/The Knife has become part of Myriade, while I’ve also visited the wonderful coffee shop in the basement in Dominion Square. The other two are on my list for when I’m next in Montréal.