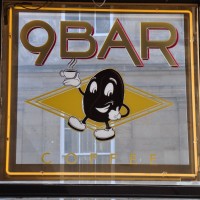 Newcastle’s 9Bar serves excellent coffee and world-class cheese toasties. In that respect, it reminds me of Montréal’s Le Lapin Pressé although that’s where the similarity both starts and ends. While Le Lapin Pressé, contrary to its name, is almost as laid back as Flat Caps Coffee, 9Bar is at the opposite end of the scale.

The walls are plastered with the four characters “9Bar” repeated over and over again, interspersed with slogans such as “The pressure is good for you | 9Bar coffee” (if you’ve not worked it out yet, espresso is made by forcing hot water through the ground beans at nine bars of pressure). This, coupled with the really loud music (loud enough for several other people to comment on how loud it was…), make for a pumped up atmosphere which I found really enjoyable (much to my own surprise). However, if that’s not to your taste, there are seats outside, plus a large outdoor seating area on the broad pavement of the pedestrianised Grey Street, right next to the Theatre Royal.

As well as coffee and toasties, 9Bar has other food options, a good selection of cake, tea, soft drinks, beer and wine by the glass.

August 2015: I had heard rumours that 9Bar had closed, but on my latest trip to Newcastle, I popped by and it has indeed gone, with no evidence that it was ever there, which is a real shame.

9Bar boasts, strangely, the best cheese toastie in the world. Well, I guess someone has to have it, so why not 9Bar? Of course, when faced with that sort of a challenge, I had no option but to try one. It was, after all, lunchtime. Not that I associate cheese toasties with high cuisine, but after some good examples in Montréal at Café Plume and Le Lapin Pressé, I was up for the challenge.

The result was surprisingly wonderful. World’s best? I’m not qualified to say. Pretty damn good? Definitely. The bread, a white bloomer, was toasted to perfection, crisp, not soggy and, for white bread, remarkably tasty. The cheese, a very mature cheddar, was rich in flavour, but without the sharp bite you sometimes get with a strong cheddar.

The only downside was that it meant I couldn’t try the other food offerings, which included some interesting stone-baked flat breads and a couple of arancini (Italian risotto rice balls) options.

Anyway, this is a coffee blog, so enough with the toasties already! To make up for it, and because I was feeling cheeky, I challenged the barista to make me the single cup of coffee which best showcased 9Bar’s coffee. I said it could be black or with milk, espresso or brewed. Then I left him to it. I’m not sure he was that impressed…

What I got was a Ristretto, which, incidentally, was not on the menu. Serves me right, I guess. Served in a glass, short and well made, it was surprisingly good. I say surprisingly since it was Square Mile, and regular readers will know my struggles with Square Mile’s coffee (my only condition was that it wasn’t the Sweetshop blend; that would have been a step too far).

Turning to the coffee that was actually on the menu, I saw quite a few flat whites, also served in glasses, which looked very nice, plus some espressos in great-looking red cups and other drinks in slightly larger red cups. Finally there were some enormous white tulip-shaped mugs which I assumed were for Americanos/large cappuccinos. They were not for me and, judging by the comments of the two guys sitting next to me, they regretted their choice of coffee (rule of thumb: get your coffee in a glass or red cup…)

As a space, 9Bar is excellent. Located on a corner with doors on both walls, it’s roughly cubed-shaped and lit by multiple spotlights mounted on a lighting-rig hanging from the ceiling. Not that they were needed, with sun streaming in through the generous windows flanking both doors. The seating is a mix of sofas (two short, one long) against the wall/windows, a small bar against another window, and a few tables, some in the middle, the rest along the walls. Alternatively, there are chairs outside by both doors and the large patio on Grey Street.

I really liked 9Bar, despite having a few reasons not to. It’s loud, brash and lively with plenty of attitude. The coffee’s excellent and it was busy and buzzing all the while I was there. It might not be for everyone (there are plenty of times when it wouldn’t be right for me), but life would be slightly less worthwhile if 9Bar wasn’t there.

If you enjoyed this Coffee Spot, check out the rest of Newcastle and Gateshead’s speciality coffee scene with the Coffee Spot Guide to Newcastle & Gateshead.