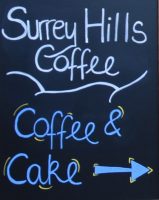 Surrey Hills had a legitimate claim to be first speciality coffee shop in my home town of Guildford when it opened on Chapel Street in 2016. That shop is no more, Surrey Hills moving in the summer of 2018 to a much larger space a few streets over on Jeffries Passage. Since then, Surrey Hills has gone from strength to strength, including opening a second outlet in London Square.

When Surrey Hills moved into Jeffries Passage, it initially only occupied the downstairs, although even this was far bigger than the Chapel Street original. However, there is a bonus upstairs area which close to doubles the available space and which has been open for some time now. I popped in at the start of April to check it out before leaving on my latest trip. I also caught up with the latest developments in Surrey Hills’ on-going desire to reduce waste.

If you are familiar with Surrey Hills on Jeffries Passage then you’ll know that not much has changed downstairs since it opened in June 2018. Indeed, if all you do is pop in for coffee and aren’t very curious, you might not even realise that there is an upstairs, particularly if you’ve never needed to use the toilet.

However, an upstairs there is, a simple, open rectangular space that provides a quiet, secluded seating area, doubling as an occasional function space. Accessed via a doorway in the back left-hand corner downstairs, an enclosed flight of stairs runs from left-to-right along the back wall of Surrey Hills.

The changes aren’t restricted to upstairs. In an attempt to reduce waste, Surrey Hills no longer sells pre-packaged bags of coffee. Instead, the retail shelves are lined by tubs of coffee, with a scoop and scales at the end. This means that you can buy as much or as little as you want, plus you can reuse your own bag or container.

Not that any of this is particularly new. Coffee Charisma on Guildford’s North Street Market has been selling coffee this way since opening, while Workhouse Coffee has also used an identical model since day one. However, far too few coffee shops/roasters operate this way and it’s excellent to see another joining the ranks.

Surrey Hills has also started serving simple breakfast and lunch menus. Originally, I’d just dropped in to deliver a present, some Chinese-grown coffee from Mellower Coffee, spoils from my previous trip to Shanghai. I ended up staying for a rich, creamy flat white, plus breakfast, avocado and feta on sourdough toast. This was excellent, my toast loaded with both avocado and feta, a perfect combination.

There’s a full write-up of Surrey Hills Coffee, including a complete gallery, in its main entry. You can also see what I made of it in my original write-up, from June 2018.