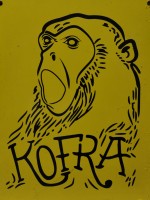 Every now and then, as I travel around the country, I come across a real gem; a wonderful, amazing coffee shop that makes me grateful that I am lucky enough to spend my time writing the Coffee Spot. On the far side of Norwich (which is about a 15 minute walk from the near side of Norwich, such is the compact nature of the medieval city centre) is such a place: Kofra Speciality Coffee Brewers.

Kofra is a delightful spot. It’s not huge, but there’s more to it than first meets the eye, with one of the cosiest backrooms I’ve seen in a long while. The key to Kofra is its commitment to great coffee, to the extent that there’s no food, not even cake (the only exception to this is doughnuts at the weekend), the focus purely on the coffee.

Kofra is the UK distributor for Antwerp’s Caffènation, which it sells under the Kofra brand. Kofra has Caffènation’s LGB seasonal espresso blend in the main hopper, with a single-origin, which changes every week, in the second hopper. There’s also decaf. However, where Kofra really scores is in its filter coffee, with both bulk-brew and hand-poured options (Aeropress/Clever Dripper).

I didn’t know much about Kofra before I got there. I was in Norwich researching for Issue 16 of Caffeine Magazine and my guide, Alex, of Strangers Coffee House (coincidentally one of my all-time favourite Coffee Spots), insisted that we visit Kofra. Tucked away opposite Norwich’s 19th century Catholic Cathedral, it’s a little out of the way. Kofra immediately stands out from its non-descript brick-built terrace, its bright yellow A-board making a splash. Then there’s its name, written in big, shouty letters on the window.

The door’s on the left, while the aforementioned (large) window’s on the right, a bench outside on the broad, quiet pavement. Korfa’s L-shaped, the door in the heel of the L. To your right is the counter, occupying the entire back wall opposite the window, while the window itself has a bench of its own, mirroring the one outside. There’s no table: Kofra’s not wide enough!

Directly ahead of you is the other part of the L. This has a similarly minimalistic layout, a large grinder on the left, followed by two flasks for the bulk-brewed coffee. Next, a retail table holds rows of Kofra’s brightly-coloured coffee bags, opposite which is a tap on the wall, with glasses should you want water with your coffee.

Right at the back, there’s a solitary table next the doorway to the cosy back room, which runs the width of Kafra. The ideal space if you want a bit of solitude, it’s not huge either. There’s a two-person table against the wall on the left, another two-person table immediately to your right and, in the main space to your right, a six-person communal table.

The décor’s simple, white-washed walls and ceiling offsetting a lovely wooden floor, while the counter’s a wooden-topped affair, painted black in contrast to the walls. This provides the perfect backdrop for various works of art from a local art dealer. These are all for sale and, if I’m honest, a cut above the average artwork usually found in coffee shops. There’s also a folding bicycle on the wall behind the counter, where you’d expect the menu to be. The menu, in turn, hangs above the doorway to the back room. Finally, light-fitting fans will be pleased with the row of bare bulbs dangling above the counter.

The real draw’s the coffee, from Caffènation. I first tried it in Paris at Loustic, where I discovered that Caffènation has some superb roasts. Kofra’s owner, José, gave us a full rundown. We started with the guest espresso, a single-origin Costa Rican. On its own, it was way too bright and fruity, causing me to pull funny faces. However, in milk, it was sublime, an amazingly smooth drink, with a real fruity sweetness, akin to a banana milkshake.

The guest espresso was also the filter of the day, where it also impressed, a rich, sweet, juicy brew. Although José is Guatemalan, when it comes to coffee, his heart’s Kenyan, so there’s always a Kenyan on the second filter. I liked this one, a bright, sharp brew, but I preferred the Costa Rican. However, this is bulk-brew at its best.

Finally, we tried the cold-brew, which comes either bottled (Iced Black) or as a Black & Tonic. Both use the same blend of beans, but different brew methods. The Black & Tonic’s served over ice with a slice of lemon. It was okay, but too bitter for me. The Iced Black, in contrast, is sweetened with a 2% sugar syrup, taking the edge off the bitterness. I really liked it and, with a slice of lemon, it was even better!