Coffee Spots come in all shapes and sizes, but for some reason I have a real soft spot for small Coffee Spots. Last year the “Smallest Coffee Spot” Award was won by Bica Coffee House.

Glasgow‘s Peña is a bit like a TARDIS: it’s much bigger on the inside, where it spreads out over two floors. From the outside, however, it looks a bit like a garden shed! The coffee is pretty good too, as are the toasties.

Manchester‘s Grindsmith, on the other and, is very much what-you-see-is-what-you-get. It’s actually surprisingly spacious inside and beautifully fitted out. The coffee output is also impressive, with filter and espresso, the later earning Grindsmith a place on the Best Espresso shortlist. 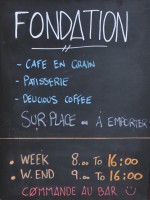 Paris‘ Fondation Café is a truly tiny spot, unless you count the outside seating. Sprawling out onto the broad pavement in front of the café, it does feel as if it is an integral part of Fondation.

Fondation has also made it onto the Best Overseas Coffee Spot shortlist.

Opposite Café is effectively a kiosk inside Leeds‘ Victoria Quarter shopping centre. So it really is tiny. Unless you include the outdoor seating, which got Opposite a place on the Best Outdoor Seating shortlist. 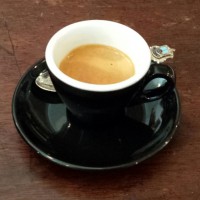 The original Tamper Coffee, on Sheffield‘s Westfield Terrace, is not as small as it once was, having knocked through the back wall to add an extra seating area. However, it’s still pretty small and cosy. For all its small size, it definitely acts like it’s much bigger with its wide range of food and impressive coffee menu, including guest espresso and filter coffee. 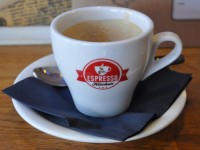 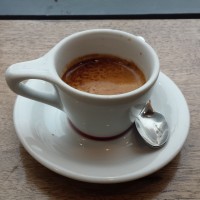 The original Gasoline Alley in New York City was not much more than a corridor, but the second branch, down on Grand Street, takes this to another level. Inside there’s just enough space for a window bar and a couple of seats. Despite the lack of space, Gasoline Alley pulls a mean espresso shot, good enough to earn it a spot on the Best Espresso Award shortlist. 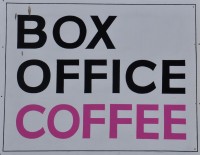 Bridport‘s Box Office Coffee is in an old theatre box office and, unsurprisingly, is pretty small. However, like its parent, Number 35 Coffee House and Kitchen, it’s a true multi-roaster coffee shop with both espresso and filter coffee on offer. Box Office has also been shortlisted for the Most Unlikely Place to Find a Coffee Spot Award. 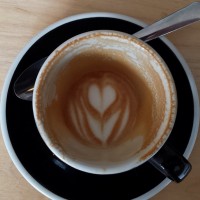 Lanark Coffee took over the old Drink, Shop & Dash space earlier this year, creating a much more stripped back look with the focus firmly on the coffee. Last year Drink Shop Dash got as far as a mention in the Smallest Coffee Spot Award, but this year Lanark as taken it all the way to the shortlist. Also shortlisted for the Best Coffee Spot near a Railway Station Award.

Back in the day, when it was Caffeine & Co, Manchester‘s Pavé Coffee made it to the shortlist for the 2013 Smallest Coffee Spot Award. Since it’s no bigger under its new ownership, it’s only fair that it’s back on the shortlist this year. Pavé was also shortlisted for the Happiest Staff Award. 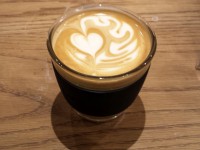 One of the newer Notes, the Canary Wharf branch is on the concourse of the tube station. Long and thin, the majority of the space is taken up with the counter, which houses twin espresso machines,a bulk-brewer and an impressive food offering. Notes was also shortlisted for the Best Takeaway Coffee and Best Coffee Spot near a Railway Station Awards.

Moon Beer & Coffee in a cosy spot opposite Chester’s central library
Doctor Espresso – Mama V’s, in an arch under the railway at Clapham High Street
Asado Coffee, Pickwick Place, tiny unless you count the large outdoor seating area
Either/Or in Seattle, which blows its chances by having two seating areas
Tandem Coffee Roastery, in Portland (Maine) with its lovely espresso bar
BLK Coffee in Newcastle, which is also just too big to make the shortlist
Kioskafé, which blew its chances once the attached newsagents was taken into account
The Milkman a recent addition to the Edinburgh coffee scene
Jika Jika, Euston Square, which again is just too big to make the shortlist

And the winner is Pavé Coffee
Runners-up: Grindsmith and Box Office Coffee