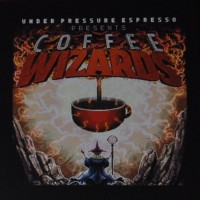 Sutton Coldfield, to the northeast of Birmingham, on the way to Lichfield, is, like Beeston (west of Nottingham), not one of those places which immediately springs to mind when I think of speciality coffee. However, I’d been hearing consistently good things from my Birmingham friends about Under Pressure Espresso (although I keep getting it confused with Reading’s Coffee Under Pressure…) so I thought it was about time I visited…

Sandwiched between an insurance agent and a large, generic bar/lounge, Under Pressure Espresso is bigger than it looks, going a long way back from its small street-front. That said, it’s still quite small, with space for about 25 people if everyone squeezes up.

The coffee is usually from London’s Workshop, but sometimes the owner, Matt, rings the changes with other roasters getting a look-in. There’s a single choice on espresso and another on filter, Under Pressure Espresso taking the unusual route of using the Clever Dripper. Regardless of roaster, the coffee changes on a regular basis, usually when Matt tires of the current offerings. There’s a selection of loose-leaf teas and, if you want something with your coffee, there’s some excellent cake, either home-baked by Matt/Matt’s wife or from Lil’s Parlour.

From the street, there doesn’t seem to be much to Under Pressure Espresso. Other than a (glass) door on the right, the entire front is a single floor-to-ceiling window, in front of which is an L-shaped arrangement of benches. Inside, the layout’s similarly simple, counter on the left, the majority of the seating on the right. There’s a small bench (with coat hooks and retail shelves on the wall above it) next to the door, then a row of five tables against the right-hand wall, which extends beyond the counter where Under Pressure narrows to accommodate the toilet. There’s a two-person and a six-person table opposite the counter, with three more two-person tables beyond.

There’s more seating on the left: a three-person window-bar, with stools, plus a large, square, communal table with benches on all four sides between window and counter. This is an L-shaped, wooden affair, cakes and Clever-drippers on the bottom part of the L, facing the window. The longer side faces the opposite wall, with the till, La Marzocco espresso machine and single grinder.

Although long and thin, Under Pressure’s bright and airy, due to both the large window and the generous provision of lights (which Matt wants to upgrade to make it even brighter). There’s a concrete floor, wooden furniture and polystyrene ceiling tiles, while to the left, by the window, there’s a little bit of exposed brick. The remainder of this wall’s painted red, which really lifts the place, while the right-hand and back walls are a light-grey, the colours coordinating with the cups (the small ones are red, the large ones, grey).

When it comes to the coffee, service is very important in Under Pressure. Everything comes with a glass of water, which is constantly topped up by the ever-attentive Matt. Filter coffee is served in a carafe with a cup on the side, and all the cakes come with knife/fork and neatly-fold napkin. I approve.

But what to have? Normally I don’t drink long blacks. However, emboldened by my adventures with Jess (of EatingEast), I accepted Matt’s recommendation of Workshop’s Cult of Done (currently a Rwandan Kamajumba) stretched with a little hot water. While I enjoyed the resulting cup, a rich, fruity coffee with plenty of body, it did rather reinforce my prejudice/taste that I’d prefer filter over a long black. It also left me keen to discover what it would be like on its own and in milk, so Matt made me a split shot.

In milk, I felt it was a little anonymous, but very pleasant, while the milk was excellent, holding its latte art to the bottom of the cup. However, for me, it really shone as an espresso. A surprisingly bright, punchy coffee, it’s still well-balanced, very much a back-of-the-mouth experience.

I paired my long black with a Scandinavian chocolate bun (from Thirteen), a rich, chewy dough, liberally sprinkled with dark chocolate, but not so much that the chocolate is over-powering. The other cakes looked equally tempting, including a pecan slice which almost edged the bun out. However, at Matt’s recommendation, I had the last slice of the cinnamon streusel (a cinnamon-swirled cake with an immensely rich, coffee cream icing on top) with my split shot.

In case you’re wondering why Sutton Coldfield, Matt grew up here. On his return two years ago, after several years working in speciality coffee in Canada, he looked to open in central Birmingham. However, unable to find anything suitable, when this unit became available, he jumped at the chance to return to his roots, opening Under Pressure Espresso at the end of 2014.

3 thoughts on “Under Pressure Espresso”